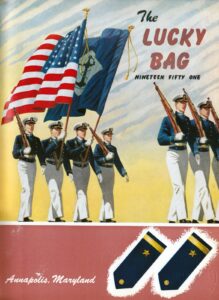 From the 1951 Lucky Bag, courtesy of the Navy Department Library

The Cold War enveloped the Naval Academy Class of 1951. As they entered upon their four years of education and training in Annapolis the words of Winston Churchill’s Iron Curtain speech still echoed in Bancroft Hall. After four years they graduated and were commissioned as ensigns and second lieutenants in the Navy, Marines and Air Force just in time to join in the Korean War. Through numerous confrontations and crises afterwards the class stood in the forefront of American resolve to meet and parry Soviet inspired crises around the world including Lebanon, Cuba the Tachens, Lebanon and in the Mediterranean and more. In the Vietnam War the class led as ship and squadron commanding officers and Marine battalion commanders. Meanwhile Class of ’51 submariners shadowed Soviet attack submarines and SSBNs. In short, they formed a centerpiece of American efforts in confrontation with the Soviets and their allies.

To memorialize those efforts and their classmates who lost their lives, the Naval Academy Class of 1951 has raised and contributed $51,000 to the building of the Navy’s Cold War Gallery annex to the National Museum of the United States Navy in the Washington Navy Yard. For their generosity, all unsolicited, the Naval Historical Foundation extends heartfelt thanks and challenges other Cold War veterans groups to do likewise.