By CDR William G. Roy, USN(Ret). CDR Roy describes his experience as a member of the salvage party on board the aircraft carrier USS Yorktown (CV-5) during the Battle of Midway. CDR Roy is a long time Naval Historical Foundation member. 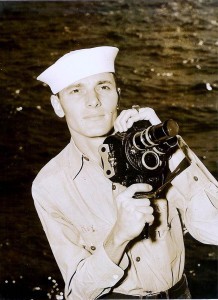 Photographer's Mate 2nd Class William G. Roy, holding the camera he used to film the Battle of the Coral Sea and Battle of Midway. Photo courtesy of William Roy.

I was a member of the Yorktown salvage party. I volunteered 5 June 1942. I had been picked up by the USS Hammann (DD 412), with Captain Buckmaster, after we had abandoned Yorktown. He called for volunteers. I knew Captain Buckmaster, since I served on the bridge of Yorktown at Coral Sea as his photographer. I returned with the salvage party on USS Hammann early on the morning of 6 June 1942. Our first order of business was to put out the persistent fire burning below decks in the forward rag locker, near the aviation gasoline, bomb storage and torpedo storage. Hammann provided some pumps for water, electric, and we popped the valves of some C02 fire extinguishers and tossed them down a hole from the hangar deck. It was very difficult to walk on the deck at a 28 degree list to work. I was then asked to help cut away one of the port bow 5 inch guns. First I stopped by the burned out photo lab. The bomb that went into the stack and exploded caused the boiler room personnel to don gas masks, and to shut down the remaining boilers. The bomb also burned the photo lab, the executive officer’s office and the first lieutenant’s office. I had left the 4 X 5 Speed Graphic Camera on a table in the photo lab. The 35 MM Bell and Howell movie camera I left on the starboard deck outside the photo lab, hoping to get it and abandon ship down a line. Three cans of movie film I had taped up tight and placed under my shirt and life jacket. When I returned with the salvage party the 35 MM camera was gone. I found two aerial cameras in the right hand corner of the photo lab with a little burned paint chip on the K-20 5 X 7, hand held, Aerial Camera. The K-l Fairchild Aerial Camera, made an 8 X 10 size photo, with electric drive as well. It had a Zeiss Lens and I took it to the Hammann and passed it over to a sailor. I took the 4X5 Speed Graphic cameras and made one photo of the 5 inch port gun being cut away. I then helped jack it up and over the side. Next I was asked to go to the hanger deck to help lower new spare TBD-TS from the hanger deck overhead and push them over the side. I asked Captain Buckmaster, “Give me one of these planes.” He said “you got it Roy,” as it went over the side. So my airplane is in about 17,000 feet of water, if I can get it.

I was then asked to help the Pharmacist’s Mate go up on the flight deck and identify the dead and bury them. I said a short prayer for each one of the sailors. We found some sailors lying on the flight deck. Removed their watches, ID tags, and personal effects and put them in a brown bag. One dead sailor had crawled into the emergency radio cubby hole, starboard side, aft of the island by the catwalk. Unfortunately all the identification in the brown bags was laying together on the hanger deck, and was lost when Yorktown was struck by two submarine launched torpedoes and they slid down the hanger deck in the Pacific. 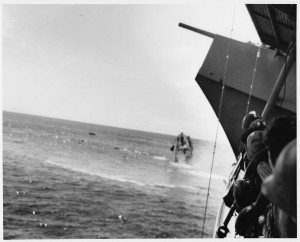 I had gone back to the port 5 inch gun mount to help remove the second gun, when the 20 MM gun alert was sounded. I ran across to the starboard side in time to see the bos’n mate with a fire axe cutting the bow lines. The Hammann port turbine was screaming. I held the camera up to take a photo. The last thing that I saw was the bos’n mate flying forward over the bow when the Hammann was hit under her bridge by the first IJN 1-168 torpedo and broke in half, killing 12 of her 16 officers and exploding in my face. I was knocked back into a bulkhead hitting my head and left shoulder and was dazed. I had just recovered and was up when the next two torpedoes struck Yorktown, starboard side. Yorktown rolled hard, shook stem to stern and I was thrown into a bulkhead and to the deck. Sailors were thrown overboard from Yorktown and off the Hammann. One leg of the tripod mask sheared its rivets. Aircraft fell from the hangar deck over head. Landing gear collapsed on aircraft. I was thrown back into a bulkhead and hit my shoulder and left side of my head. I got up in time to see Hammann‘s stern going back with sailors hanging on and sailors in the water. I made two photos. Hammann‘s stern sank, and when it reached its set depth the 18 depth charges on her stern exploded with a mighty eruption of water, higher than Yorktown. Again Yorktown rose up and rolled hard shaking stem to stern. I went to the deck. When I got up and made the last photo no one was in the water. All the sailors were gone. I had no more un-exposed film in the 12 exposure film pack of the 4 X 5 Speed Graphic Camera, the same camera that I had used on 4 June 1942 and left in the photo lab. That is when I went to the photo lab and got the K-20 Fairchild Aerial Camera. It had a small place on top where grey paint had burned and fell to stick on the cover. This is size 5X7 inch image, roll film camera and had a lot of film left in it. It required manual operation to advance the exposed film. I left Yorktown with the two cameras. I went over the side with Captain Buckmaster to board USS Vireo (AT 144), which had cut its’ tow line from Yorktown and come around to her starboard side to recover us. Captain Buckmaster performed burial services for two officers and one sailor from Vireo. We then went alongside USS Balch (DD 363). 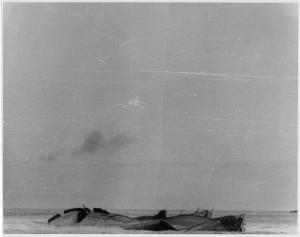 I was up early the next morning, hoping that we could resume salvage work on Yorktown. I was on deck when the announcement came over the ship’s loud speaker, “Yorktown photographer, report to the bridge on the double” It was Captain Buckmaster. We were circling the Yorktown fairly close. I started making photos with the aerial camera. Yorktown slowly rolled to port, and slid stern first below the surface. I could hear the rupturing of compartments and Yorktown sank. The ocean water was bubbling in swirls and wood and other debris bubbled up to the surface. I made photos until Yorktown disappeared. Captain Buckmaster ordered the Batch skipper to come around and go through the floating debris, wood crates, planks, rags, foaming dirty gray water. We passed through where Yorktown had sunk. Captain Buckmaster said “come about and go through again.” Balch circled and came back through the still foaming and trash laden water. Captain Buckmaster said to Balch skipper, “come about and go through again.” The Balch skipper said, “I am taking her back to Pearl.” We were all crying at this time. I don’t remember any order to uncover, or remove hats. First, I did not have a sailors hat, second, I had been busy making photos with the K-20 Aerial Camera.

Upon return to Pearl Harbor we were the last to return from Midway. Sailors were put on stake body trucks and taken up to Camp Carlin, the former Marine Raider Training Camp, and in isolation. This is where the After Action Report of Battle of Midway was prepared. Stamped 18 June 1942. No uniforms. No health care. No pay records. Sometime after 18 June 1942 I returned to Pearl Harbor and went to the photo lab and turned in all my films. I held a secret clearance, but I was not allowed in the photo lab, because the lab photographers were working on other war photos so I left all the film to be processed. It was months later that I first saw the 35 MM movie films, which had been highly edited. The 4 June 1942 photos and 35 MM movies of the first bomb hit aft on Yorktown‘s flight deck, had killed most of the 1.1 gun crews, and the films showed the dead, wounded and dying, body parts and pieces. The “Telenews One Hour” theater, Market Street, had in big letters “YORKTOWN SUNK”. That was the only time that I saw any of my films, shown along with other Army battle films, etc.

In 2005, Otis Kight, AO 2/C VF-42, LCDR (Ret) Virginia Beach, and Cathy Munroe, Fredericksburg, Virginia, went to the National Archives and found the movie films I had made at Midway. The nitrate film, (the film deteriorates with age and give off an odor) had been copied, I believe to video tape, and preserved. They bought 8X10 photos from selected frames, such as the IJN torpedo aircraft attacking Yorktown, and the port side catwalk bent up in the air from the torpedo explosions and sent them to me. I was very surprised to find the movie film was still in existence. I was absolutely stunned, surprised and very pleased to later learn that the 19 photos that I made of Yorktown sinking 6 June 1942 were still in existence. I know many years ago one photo was published and I always wondered what happened to the other photos that I made that fateful and sad day when Yorktown sank. Apparently they have served many purposes for ship surveys, and also to show how an aircraft carrier like Yorktown sank.