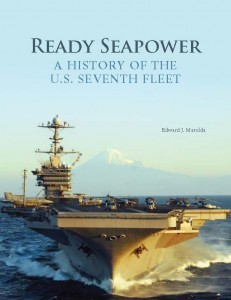 A new book has been published by the Naval History and Heritage Command, authored by historian Dr. Edward J. Marolda. It is titled Ready Seapower: A History of the U.S. Seventh Fleet. This historical study covers the service in the Asia-Pacific region of the U.S. Seventh Fleet during the 20th and 21st centuries. The Fleet saw combat in nearly every major battle of World War II in the Pacific and was in the forefront of U.S. forces involved in Korea, Vietnam, and the Arabian Gulf. Today the Fleet acts as a deterrent to aggressor nations, participates in joint and combined exercises, conducts counterterrorism and antipiracy operations, and provides humanitarian assistance as well as disaster relief. Partnering with its Asian allies, the Fleet maintains peace and stability in the region, patrolling the ocean commons to keep vital waterways open for commerce.

The book comes in at 211 pages, and has extensive imagery, including black and white and color photography, artwork, and maps. Ready Seapower is available both for purchase as a large size paperback, or for free download. To purchase the paperback print version, please visit the Government Printing Office online bookstore. The book can also be downloaded in its entirety on the Naval History and Heritage Command publications page.

Interested readers should also note that in conjunction with this new book on the Seventh Fleet, the Naval History and Heritage Command has republished Anchor of Resolve: A History of U.S. Naval Forces Central Command / Fifth Fleet. It can also be purchased online as a large format paperback at the Government Printing Office, or downloaded for free from the Naval History and Heritage Command publications page.