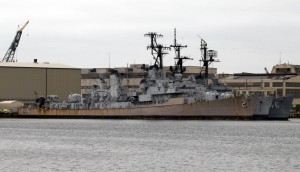 A few weeks ago, we shared the story of our trip to Philadelphia to scavenge parts off a Cold War destroyer, ex-USS Forrest Sherman. Moored alongside Forrest Sherman is another decommissioned destroyer, ex-USS Charles F. Adams (DDG 2). Coincidentally, just days prior to our trip to Philadelphia, we had the opportunity to meet with John O’Neil in our offices at the Washington Navy Yard. O’Neil is the Executive Director of the Adams Class Museum, a group working to bring the destroyer to Jacksonville as an attraction on the city’s Riverwalk.

USS Charles F. Adams was the lead ship of a class of guided missile destroyers built during the heart of the Cold War. Named for a Secretary of the Navy who served from 1929 to 1933, Adams was commissioned in 1960. She was the first ship designed as an anti-aircraft missile platform. The destroyer was one of the ships involved in quarantine operations in 1962 during the Cuban Missile Crisis, and also served as a recovery ship for NASA’s Mercury space program. She had a long career, and was not decommissioned until 1990.

In the 1990’s, a group attempted to acquire Adams as a museum ship on the Great Lakes, in Michigan, but that group never overcame the many obstacles that are inherent in acquiring and preparing a ship for public display. The Jacksonville group, however, has made significant strides and are confident they will acquire the ship and turn her into a successful waterfront attraction The Jacksonville Historic Naval Ship Association (JHNSA) and the Adams Class Veterans Association (ACVA) have been working together, making good progress, and are in the seed money campaign part of the project. They have raised almost $500,000 to date, and have funded many of the necessary studies and advance work to demonstrate to the Navy their resolve in meeting the many requirements to safely obtain and tow the ship to its final berth. In late 2011, the Navy determined that Adams is eligible for listing in the National Register of Historic Places, as an historic vessel.

JHNSA have inspected the ship many times, and they believe it can be made ready for towing to Jacksonville in a relatively short time. The BAE shipyard in Jacksonville will dry dock Adams and perform refurbishments such as removal of both screws and both SONAR domes, repair hull plating as needed before sandblasting, preserving and painting the hull and the above decks to the top of the masts, along with various other fixes. These fixes could cost over $2 million. A 100 year weather event protected mooring system has been designed for a permanent berth in downtown Jacksonville, on the east side of the Acosta Bridge on the south bank of the St. John’s River – projected cost could be $6 million (see rendering below). The ship will not be returned to service or to operation other than utilizing the ship’s 110 V electric systems and possibly some 440 V.

RADM Vic Guillory, USN (Ret.), Military Department Head for Jacksonville Mayor Alvin Brown, and a former JO on USS Towers (DDG 9), has been briefed in detail. VADM Jim Amerault, USN (Ret.), formerly OPNAV as the N4, is also on the JHNSA Board. The Governor of Florida Rick Scott, as well as Lieutenant Governor Jennifer Carroll, are both Navy Veterans and are in support of the project. The group has former mayoral candidate and noted business leader Jim Bailey on board. The JHNSA looks forward to working with any one who can help “Bring Home the USS Adams.”

Please visit them on the web at www.adams2jax.org for more information. 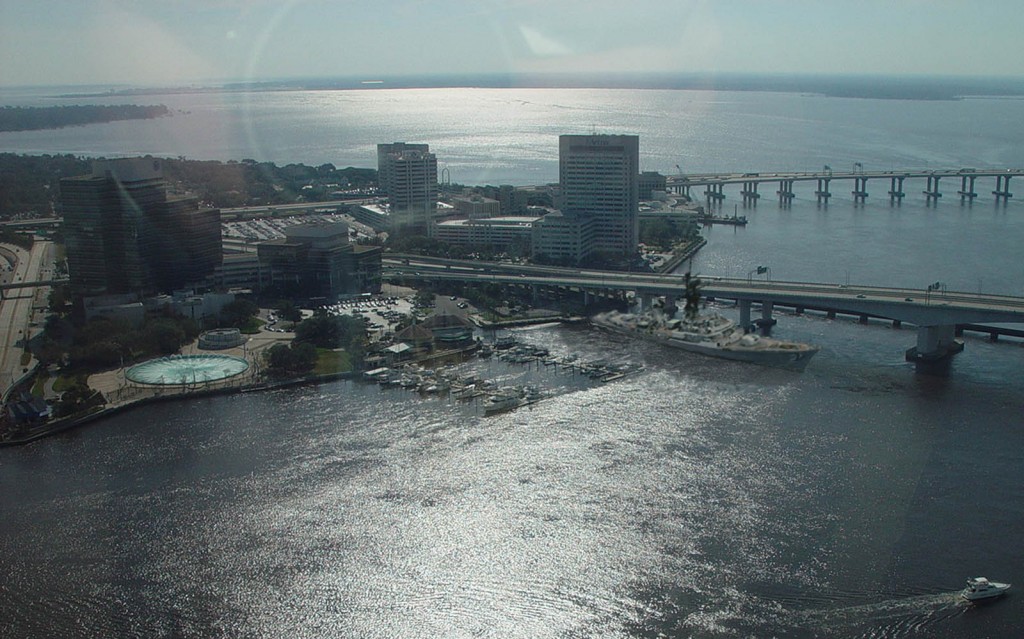