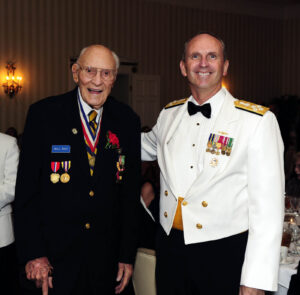 This past weekend at the Army Navy Country Club in Arlington, Virginia, some 200 guests gathered to salute seven veterans in attendance, and the memories of  thousands more, who fought in one of the greatest battles in naval history – the Battle of Midway.

In the late 1990s, retired World War II veteran Vice Admiral William Houser sounded a clarion call to formalize these recognition efforts. The call was answered when Chief of Naval Operations Admiral Jay Johnson signed a 1999 message to the fleet on the subject of naval heritage that stated: “It is apparent that the two most significant dates in our naval history are 13 October 1775, the birth of our Navy, and 4 June 1942, the Battle of Midway.”

At this year’s event, Dinner Chairman Lewis took a few minutes to pay tribute to Houser with a short video retrospective of his life–Houser passed away this past February. Houser’s wife and two of his daughters were on hand to express their appreciation for the tribute and reiterate how passionate the admiral was on this subject.

At the dinner, Chief of Naval Operations Admiral Jonathan W. Greenert and noted naval historian Dr. Craig Symonds linked the 70th anniversary commemoration of the Battle of Midway with the 200th anniversary commemoration of the War of 1812 (read the full text of Dr. Symonds’ speech here, or watch the video here).  Both noted the significance of these struggles in American and world history, with many scholars arguing that the War of 1812 was the second war for American independence and that World War II propelled the United States into the world leadership role it fulfills today.

Both men highlighted the audacity of the Americans in the two conflicts in their willingness to take on an enemy against overwhelming odds. In his remarks, the CNO stressed the importance of superior equipment, training, readiness and leadership as hallmarks of both the War of 1812 and Midway that remain germane for today’s Navy.

For Symonds, a professor emeritus at the U.S. Naval Academy who recently published The Battle of Midway (Oxford University Press, 2011), the two commemorations offered an opportunity to discuss the compelling leadership and accountability issues that inevitably arise in such epic battles. Symonds focused on Commodore Oliver Hazard Perry at the Battle of Lake Erie and Rear Admiral Raymond Spruance at the Battle of Midway. 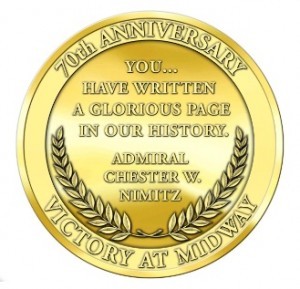 Midway Coin, on sale at the Navy Museum Store

In the case of the critical Battle of Lake Erie, the first time the Royal Navy ever lost a squadron of warships in combat, Symonds discussed Lieutenant Jesse Elliott’s performance in the Brig Niagara, which seemingly was held back while the Brig Lawrence, with Perry embarked, took the brunt of the British fire. It was after Perry transferred his flag to Niagara, that her guns were brought to bear and victory was decided.

Regarding Midway, Symonds discussed the plight of Captain Marc “Pete” Mitscher, Commanding Officer of Hornet, who sent his air group out on a different heading than those of Yorktown and Enterprise to search for the four Japanese aircraft carriers. Of the four Hornet squadrons of aircraft sent on a bearing of 265 degrees, only Torpedo Eight, abandoning the prescribed search route, was able to locate the Japanese carrier strike force and participate in the attack. Many of the other aircraft of the infamous “flight to nowhere” returned to Hornet without engaging the enemy and some ran out of fuel, forcing pilots to ditch their aircraft into the open Pacific.

In both cases, arguments were made about the way Navy leadership dealt with the accountability for Elliot’s and Mitscher’s actions in those battles 129 years apart. Symonds explained that Perry and Spruance ultimately chose not to hold their subordinates accountable for questionable decisions in the wake of the great victories, which reflected a desire to not undermine the morale boost that both outcomes had given the nation nor diminish the accomplishments of those who fought and died to achieve the victories.

During the dinner, seven Midway veterans were presented with special 70th anniversary commemorative coins that the Dinner Committee commissioned especially for this year’s events. The veterans in attendance were:

With the forthcoming opening of a newly reconstructed Army Navy Country Club later in 2012, next year’s Midway Commemoration Dinner should be grander than ever! 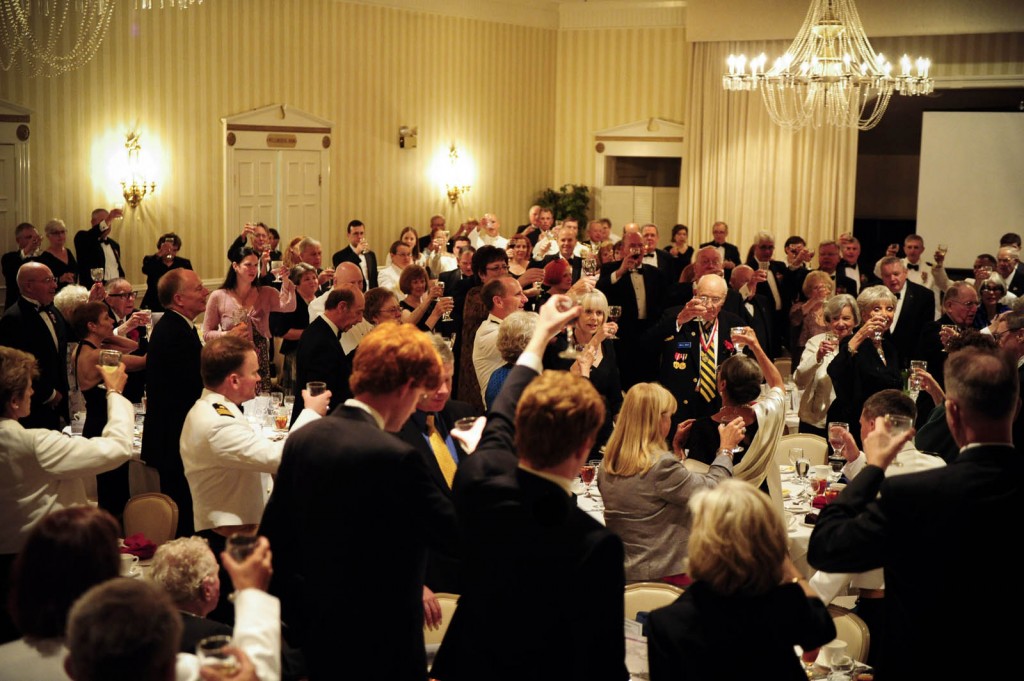 See more photos of the event on the CNO’s Flickr photostream.