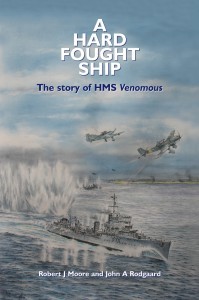 Every ship has a unique life, and in the case of HMS Venomous, that life was long and useful, and it covered a wide spectrum of missions as the tactical roles of destroyers evolved between the end of World War I and the end of World War II. Similarly, every ship has a unique “personality,” a tone or spirit that is created day-by-day by those who serve in her. And in the first chapter of A Hard Fought Ship the spotlight is focused on that aspect of a ship’s career, plus the fortunes of war: “[I]n the end, a warship’s ability to perform in combat rested upon the quality of the crew and a little bit of luck. We will see that Venomous had both.”

HMS Venomous was a “V & W” class destroyer, and she was launched in the upper Clyde on 17 April 1919. Immediately after launching she was moved to a fitting out basin that she shared with the ill-fated battle-cruiser HMS Hood. Her first assignment was to participate in the Fleet Review in the Thames to mark the end of World War One. Subsequently, she was ordered to the major Royal Navy anchorage at Scapa Flow, were she joined the remains of the powerful German fleet that had been scuttled there at the end of “the Great War.”

The story of Venomous stretches on from that point to the end of World War II, and in the process, there are insights into segments of naval history in the Baltic, Mediterranean, North Sea, Arctic Ocean, English Channel, and the Atlantic. As one might expect, a significant number of the ship’s missions were non-combat, but there were also noteworthy periods of intense, life-and-death action.  Both the former and the latter types of duty are made more poignant in the book with the words of those who served in or with Venomous during her service.

Typical is the recounting of the torpedoing of the destroyer tender HMS Hecla, while in the company of Venomous during the night and early morning of 11/12 November 1942. The ships were transiting from Freetown, South Africa to Gibraltar, and it’s the words of one of Hecla‘s crew members, Electrical Artificer Edward Coleman, that capture the horror of the event. He and much of the crew had already abandoned ship, and after his recue he talked of the final few minutes before his ship sank:

“I heard men singing. But they were not drunk. As I cast around me in the darkness, I suddenly realized they were still on Hecla, now settling by the stern. They had gathered on the foc’sle singing hymns. ‘Abide with me’ and ‘Eternal Father strong to save’ carried clearly cross to me. I willed them to abandon ship; I prayed that they would join me in the drink but to no avail.”

In a more routine situation, one that involved getting under way after an extended period in port, it’s once again the actual words of someone involved that give texture to the event. In this instance it’s the thirteenth captain of Venomous, Lieutenant Commander Donald G.F.W. McIntyre, who sets the scene: “Smoke began to pour from her funnels and machinery came to reluctant life giving the ship that vibration which is its soul. In due time we nosed our way into the Firth of Forth for trials and exercises.”

Whether it’s the sinking of Hecla or a relatively routine departure from port for sea trials, in this book we constantly see the ship’s operations through the eyes of those in or directly involved with her. Consequently the reader sees the story from “the inside,” rather than as outside observer. Another important feature of A Hard Fought Ship is its 170 photographs (many are personal photos taken by crewmembers) and 12 maps and plans that help make events clearer.

A Hard Fought Ship is an expanded version of a book that was published initially in 1990. For those who go down to the sea in naval ships and those who are interested in what it means to serve in a hard-working Royal Navy destroyer , this is a special opportunity to get the story from those who lived the events that constitute the narrative of HMS Venomous.

Retired Royal Navy commander, historian, and author, Alastair Wilson, puts the book in a special perspective: “I would rate this as being up in the same class as The Cruel Sea for a picture of small ship life in World War 2.”