The Foundation has been busily occupied preparing the new exhibit “Into the Lion’s Den” for the Cold War Gallery, and on Thursday, 3 May, we were reminded of the reason we strive to build such exhibits in the first place. The National Navy Museum and the Cold War Gallery were honored by a visit from approximately 60 members of the USS Providence (CL 82/CLG 6) reunion group. Amongst the group were two sailors who were on board Providence the night of the pitched battle in Haiphong Harbor: Gary Cheever and Ken Chambers. For those unfamiliar with the exhibit, it centers around a 1972 nighttime raid by four surface warships of the U.S. Navy deep into enemy waters. The ships successfully bombarded enemy shore positions, and with the assistance of A-7 Corsair II aircraft, fended off a counterattack by North Vietnamese torpedo boats.

The Providence veterans were in town for their annual reunion, and one of the many items on their busy itinerary was a visit to the Washington Navy Yard and the Navy Museum. Early on the afternoon of 3 May, they crowded into the Cold War Gallery, and circled around the Foundation’s Dr. Dave Winkler, who gave them a brief history of the Washington Navy Yard, and explained the reasons behind the development of the Cold War Gallery. After descriptions of the Trident I C4 missile at the Gallery’s entrance, the Ready Room Theater, and the Covert Submarine Operations exhibit, Winkler described the basics of the new Lion’s Den exhibit. It quickly became apparent that two veterans of the battle were in the crowd, and Winkler asked if they wanted to share their experiences. Gary Cheever observed the battle from the vantage point of the bridge, and he offered to speak briefly to the gathered crowd. Following his remarks, we were lucky enough to speak to both Cheever and Chambers. 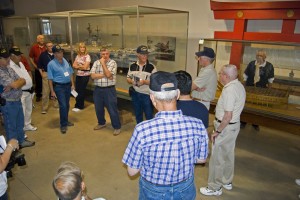 Gary Cheever (center, with hat and glasses, turned to his left) speaks to the gathered crowd about Operation Lion's Den

Gary Cheever retired from the U.S. Army as a Lieutenant Colonel, but in 1972 he was a seaman on board the cruiser USS Providence as she steamed towards Haiphong Harbor. The evening of the battle, he was serving as Duty Corpsman on bridge. He watched as the cruiser steamed in formation behind USS Newport News (CA 148) at high speed approaching the harbor. He felt the ship vibrating, as her powerful engines pushed her through the dark water. As they entered the harbor they began a long, u-shaped turn, heading into the narrow harbor, towards their enemy targets ashore. The ship leaned noticeably in the high speed turn, and Cheever felt like the port screw at times was close to the surface of the water, causing the vibration that he felt. All was dark and silent until, according to Cheever, “it seemed like the order to fire was given at the same time for all our ships, I saw that our 6 inch guns were fully depressed, and the next thing I know it was like daylight outside.” He could see enemy shore batteries firing back, using what appeared to be anti-aircraft guns. He was outfitted with a flak jacket and helmet, but when enemy .50 caliber rounds began striking the exterior of the bridge, he ducked for safety behind a bulkhead, peeking out for views through a porthole. Providence steamed at full speed throughout the entire bombardment mission, and consequently Cheever recalls that the strike was over rather quickly. 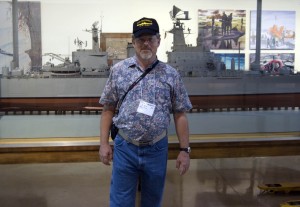 Ken Chambers was stationed in the Emergency Diesel Compartment on board Providence on the night of the battle. While he couldn’t see what was going on outside the ship in Haiphong Harbor, sounds and vibrations told him all he needed to know. As they approached the harbor, Chambers “felt the shafts speeding up, and I knew something was going on.” Fortunately for those below wondering what was going on, without a porthole to gaze out through, the communications system had been patched into the ship’s PA. Sailors throughout the ship could hear their shipmates navigating the Providence and directing fire on the enemy. The ship began shelling shore positions, and Chambers could hear enemy rounds striking the water around them.

We were thrilled to have a brief chance to speak to these two Operation Lion’s Den veterans, and to welcome all of the Providence veterans to the Cold War Gallery. If you’d like to learn more about the new exhibit remembering this daring night raid behind enemy lines, please visit our Fundly page, and consider making a donation to support its construction.