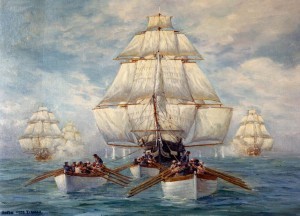 Chase of the CONSTITUTION, July 1812 Painting by Anton Otto Fischer, depicting the boats of U.S. Frigate CONSTITUTION towing her in a calm, while she was being pursued by a squadron of British warships, 18 July 1812. NHHC Photo NH 85542-KN

RH Rositzke & Associates, LLC, has completed work on five videos for the U.S. Navy’s War of 1812 Bicentennial Commemoration. We’ve posted previously about some of their recent work, including a video on last year’s Centennial of Naval Aviation and a series on the U.S. Navy in the Civil War. This latest release on the War of 1812 will be displayed as part of Navy exhibits at venues across the country, where the Bicentennial is being observed. The videos will, for the most part, be accessible on visitors’ smartphones, to be watched while they are waiting in line for the exhibits. They will also be displayed, in some locations, on video monitors.

Said Bob Rositzke,“We were pleased to be able to make a contribution to the Navy’s observance of the Bicentennial of the War of 1812. Many call this ‘the forgotten war,’ but the Navy’s role in this conflict should not be overlooked. In many ways this war put our Navy on the path to becoming a world class power.”

The video series has five parts, broken down as follows:

USS Constitution: A profile of the Navy’s most famous frigate and our enduring Ship of State

On The Home Front: A description of the Battles of Lake Erie and Lake Champlain and how these two naval engagements were key to the war’s outcome

Our Flag Was Still There: The story of the British invasion from Chesapeake Bay, resulting in the burning of Washington. The brave stand at Bladensburg and the bombardment of Baltimore’s Fort McHenry, which resulted in The Star Spangled Banner.

On Land and Sea: The story of the Battle of New Orleans, a classic example of a brilliant joint operation between the U.S. Navy and Major General Andrew Jackson.

Postwar Times: A look at how the Navy’s role in the War of 1812 shaped the crucial years that followed.