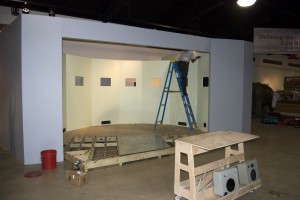 Construction progress on "Into the Lion's Den" exhibit

All of the hard work and generous donations that have gone into development of the new “Into the Lion’s Den” exhibit at the Cold War Gallery are finally coming together. This week, Design and Production, Inc. has begun preliminary installation of the exhibit in Building 70 at the Washington Navy Yard. The work is being completed in several stages, and is expected to be finished in June. When completed, the exhibit will center around the reconstructed bridge of the heavy cruiser USS Newport News (CA 148). You can read more about the exhibit, and the 1972 Vietnam War night battle it simulates, in our earlier blog story.

The first stage of the construction was erection of the wooden outer framework of the exhibit, which was completed this week. This includes a raised deck and simulated bulkheads with square openings for portholes. The exhibit is enclosed on three sides, and will have two chairs in the front for visitors to sit and view the multimedia show. Behind the scenes, a sophisticated series of LED lights have been installed, to simulate flashes of gunfire through the porthole openings. A cutting edge sound system will rumble with every blast of the Newport News‘ guns, and will play actual audio footage from the battle, as well as re-enacted audio of helm commands and radio communication with aircraft. In the photo at right, you can see the framework of the exhibit in place in the Cold War Gallery. In the foreground you can see the exposed deck framework, with one of three solid steel deck plates already in place. Beneath these plates will be high definition bass devices that will shake and rattle visitors in concert with the audio blasts and LED lights of the simulated naval gunfire show.

Separate from the exterior framework, the intricate interior bulkhead panels are being fabricated at ThemeWorks, Inc, in Florida. The craftsmen at ThemeWorks are responsible for some of the country’s best know museum and theme park exhibits, including work at projects as diverse as Disney, SeaWorld and the National Museum of the Marine Corps. They’ve been working to incorporate artifacts from the collection of the Naval History and Heritage Command, along with communications equipment we salvaged from the destroyer ex-USS Forrest Sherman, into a cohesive reproduction of a cruiser bridge.

Below you can see two of the plans showing the interior of the finished exhibit. The floor plan will give you a good idea of the placement of the mannequins inside the exhibit, as well as the location of the two chairs that visitors will be able to sit in while the multimedia show plays. The elevation view shows the placement of the communication and electronics equipment on the bulkheads. Not shown in these drawings are the many artifacts that will be on display outside of the cruiser bridge, including shells and shrapnel, as well as numerous interpretive panels. 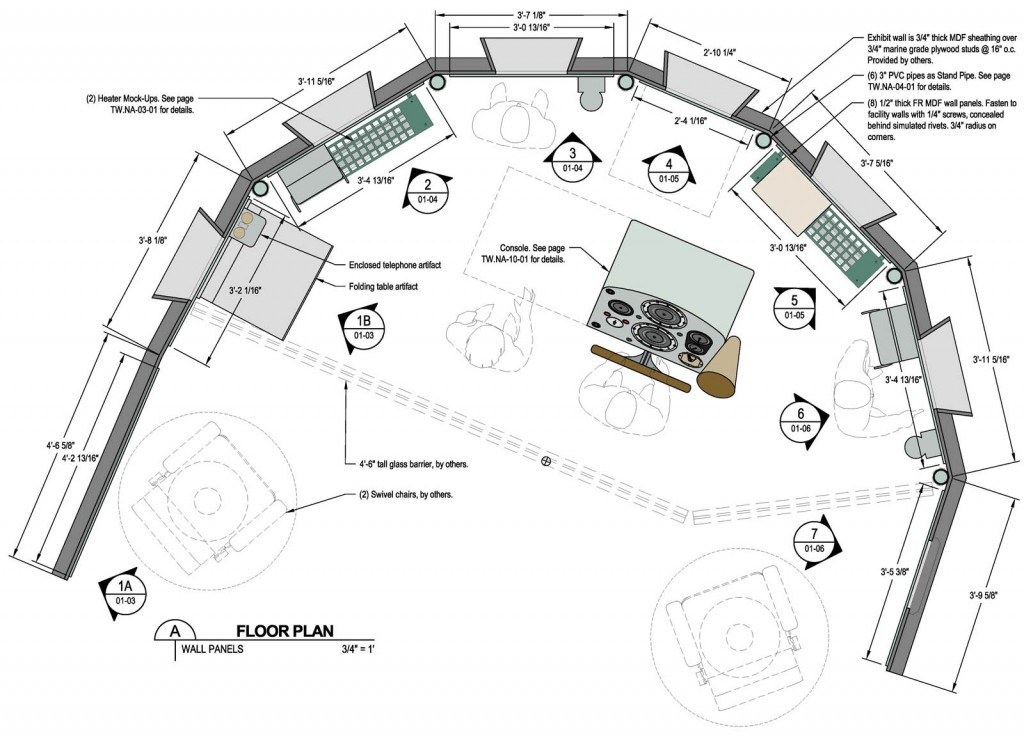 Floor plan for the interior of "Into the Lion's Den" exhibit