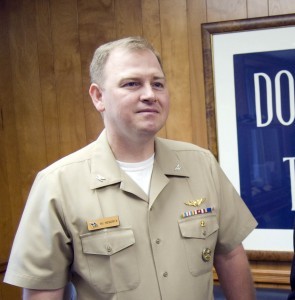 The following interview is an interview with Captain Henry J. “Jerry” Hendrix, USN, who took over as Director of the Naval History and Heritage Command on 14 May 2012. He is the author of Theodore Roosevelt’s Naval Diplomacy – The U.S. Navy and the Birth of the American Century.

Can you give us some biography background to include why you became interested in the Navy and Navy history in particular?

My dad was a Sailor and my grandfather was a Sailor briefly during WWII, although he never saw any action, so the Navy was present in my life from the moment of my birth in San Diego.  After my parents’ divorce, I grew up on my step-father’s farm in Indiana, so I didn’t really have a Navy upbringing other than I knew it was in our family line.  I became intrigued with biographies, mostly military biographies and grew up very much a believer in the romantic view of heroism and the greatness of our nation and it’s Navy.  I started out with World War II, and then just started going back from there in my interests and scope of research and was fascinated with the importance of living a life worth remembering. I am a true believer in the power of history to inspire others, just as it does with me every day.

Why pursue a doctorate and how was it that you accomplished that overseas?  Who are some of the scholars that served as your role models?

When I graduated from Purdue, I thought that my education had come to an end, but five years later I had a chance to go to the Naval Postgraduate School where I came under the tutelage of Prof. Claude A. Buss, a scholar on Asian history.  Claude, at 90 years old, was an amazing mentor and he ignited an interest in me to pursue history at the doctoral level.  I never followed the standard career path, but always found my jobs to be interesting.  I was always gravitating towards the realm of ideas.  I read the Naval Institute’s Naval History and Proceedings religiously and became aware of the growing influence of first LCDR and now Admiral James Stavridis, who I knew had a doctorate.  I began to consider how to accomplish this goal while still executing some semblance of a career and a family life, and then by some act of God, everything just came together during my XO/CO tour with Tacron ELEVEN.  I was able to enroll at King’s College (on the advice of NHHC’s Dr. John Sherwood and with the assistance of Harvard’s Prof. Akira Iriye) in dissertation phase and then completed most of my dissertation while at sea on deployment onboard USS Peleliu.

Why Teddy Roosevelt?  Hasn’t he been studied to death?  What insights were you able to provide to the scholarship of that era – Are there lessons that are germane today?

When I began the doctorate process, a much esteemed retired Navy captain warned me that the biggest challenge of the doctorate was completing the dissertation.  He said that I had to pick a topic that was original, but that it also had to fascinate me, because I would have to get up every morning for the next 5-7 years and work on it.  I chose to study Theodore Roosevelt’s use of the Navy as an instrument of his foreign policy, and I can truthfully say that I still get up every morning fascinated by President Roosevelt.  He is probably one of the top five most intelligent and dynamic citizens that this nation has ever produced and his views on the scalability of force and its intrinsic contributions to diplomacy still hold lessons for us today.  I studied his use of the Navy during the Venezuelan crisis of 1901-02, Panama’s independence movement, the Perdicaris Affair in Morocco, and during the negotiations that ended the Russo-Japanese War.  If the 20th Century was the American Century, it is because Theodore Roosevelt launched our nation as a Great Power upon the world’s stage.

What I learned from President Roosevelt is that naval power has the option, due to the characteristics of the global maritime commons, as to how much power should be displayed at any given moment.  When one ship did not bring about enough influence in Panama during the revolution, another quickly appeared over the horizon, and then another until there was enough force to convince the participants as to Roosevelt’s interests.  What they did not know was that he had ships lined up, over the horizon, ready to come to bear.  This notion of naval scalability has its effect around the world today in contested regions from the Yellow Sea to the South China Sea to the Indian Ocean and the Arabian Gulf.  If we do not have enough influence, another ship is just over the horizon.

As someone who has been a long term member of both the U.S. Naval Institute and Naval Historical Foundation how do see such organizations contributing to educating Sailors and the American public about our Navy’s history and heritage?

It’s a never ending battle in an age of electronic media and celebrity-hero worship to bring an appreciation of historic heroics into the public discussion.  To use a metaphor, history stands across the river of time from us and shouts the question, “who are you?” and demands of us an answer.  Organizations like the Naval Institute and the Naval Historical Foundation serve as conduits of that conversation between the past and the present, but it is a process and a relationship that needs to be strengthened as we go forward.  We can do it in media, as consultants to popular histories, by supporting deep, substantive scholarship, a thriving museum presence in popular culture and just by getting out and leading the conversation in our communities.  We should never underestimate the power of a lone advocate of naval history in the public discourse.

How did you manage to write your dissertation while you were deployed? What would you advise Sailors who are interested in higher education?

I was the Tacron squadron XO and Detachment OIC onboard USS Peleliu.  We wrote the airplan, executed it, and wrote another.  I wrote my dissertation between 1900 and 0100 every night and then got up at 0530 and worked until 1900.  It was a glorious time, but I couldn’t do it again.  I would advise young Sailors and officers to pursue their passions.  The Navy will support their desires, up to a point, but then they have to put their head down and move through the obstacles.  Roosevelt used to play a game with his children called “over-under-through” on their walks through the woods.  You could go over, under, or through an obstacle, but never around it.  That game taught me a lot about the way Roosevelt went through life, and how I should go through mine.

History has informed nearly every issue paper and future scenario that I have worked since arriving at the Pentagon in 2008.  The parallels between the past and the present suggest outcomes, conclusions, and divergences that are useful to policy makers in their day to day deliberations.  For instance, the impact of the Naval War College on strategic thought during the period between the World Wars is very suggestive to some of our strategic institutions today, if we choose to ask the right questions.  Contrary to popular thought, history is not about finding the right answers so much as asking the right questions.

Coming into the job as an “Interim” Director how do you see yourself helping to move the organization forward?

It’s a privilege to serve the Naval History and Heritage Command in whatever capacity I am assigned.  I have benefitted from its programs and by the mentorship of people like retired Senior Historian Ed Marolda for past 16 years.

It is my honor to serve.  My hope is that my enthusiasm for the topic will energize my dedication to the mission.  In the end, I look forward to serving the institution and moving Naval History into the future.