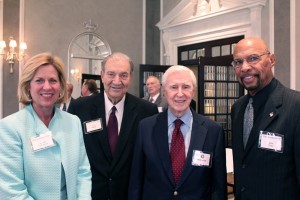 In a recent speech to an audience of 50 community leaders at the prestigious Detroit Athletic Club, Rear Admiral Joe Callo, USN (Ret), spoke about the decisive role of the U.S. Navy in the War of 1812. Among the major points he emphasized was the importance of seeing the war’s events in context, rather than as disconnected, stand-alone events. He also stated that, in his opinion, the most important outcome of the war was the fusion of American ideas of political liberty with the establishment of the United States as a globally significant sea power. Click here for the text of a similar speech delivered by Rear Admiral Callo at an earlier event.

Following the speech Rear Admiral Callo commented on the high level of interest of the audience: “The after-speech questions showed noteworthy interest in relevant history and connecting the history of the War of 1812—much of it little known up to now—to our own lives and times.” A long-time member of the Naval Historical Foundation, Rear Admiral Callo is one of a number of War of 1812 subject matter experts who are available to address audiences as part of the NHF War of 1812 Speakers program.