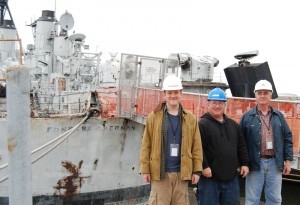 The new exhibit for the Cold War Gallery, “Into the Lion’s Den,” is scheduled to open this summer at the Washington Navy Yard. Construction on the exhibit is ongoing (see our recent update here) but we are still in the process of obtaining some of the many artifacts that will be on display. The centerpiece of the exhibit is a reconstruction of the armored bridge of the cruiser USS Newport News (CA 148). In order to make the exhibit as realistic as possible, we have been working closely with the Naval History and Heritage Command (NHHC) to locate artifacts from the era. But as construction moved ahead at a steady pace, it became apparent that we were coming up short on the type of equipment that would have been mounted on the bulkheads and overheads of a Cold War era surface warship. To that end, arrangements were made to take a trip up to the Inactive Ships Management Office (INACTSHIPOFF) in Philadelphia, home to a large number of decommissioned Navy ships. After coordination with both NHHC and INACTSHIPOFF, a plan was hatched to scour the bridge and Combat Information Center (CIC) of the destroyer ex-USS Forrest Sherman (DD 931). While Forrest Sherman is a destroyer and Newport News was a cruiser, much of the equipment used on board the ships was standard Navy issue regardless of ship class. Thus, anything scavenged from Forrest Sherman would be an appropriate and interesting addition to the exhibit.

Forrest Sherman was commissioned in 1955 as the lead ship in a new class of destroyers. She served for almost 30 years, and was decommissioned in 1982. She was later stricken from the Naval Vessels Register, sold for scrap to Fore River Shipyard in Quincy, MA, and then re-acquired by the Navy when the shipyard went bankrupt. Over the past 5 years there was some hope that Forrest Sherman would be saved and preserved as a museum ship in Delaware, but those plans fell through and the destroyer is once again set to be scrapped. 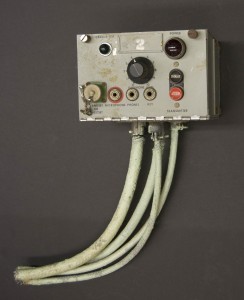 On Thursday 26 April, NHF staff members Todd Creekman and Dave Colamaria, along with volunteer Jim Moses, met up at the Philadelphia Naval Business Center (formerly Philadelphia Naval Shipyard) for a day of hard work. After a safety orientation by INACTSHIPOFF’s Sue Morrell, the three were joined by an escort from the shipyard, Matt Spaeth. A short drive around the Reserve Basin led the team to the gangway to Forrest Sherman. The destroyer is moored between two other Cold War-era destroyers, ex-USS Edson (DD 946), formerly of the Intrepid Sea-Air-Space Museum in New York City and now bound for display at Saginaw, MI, and ex-USS Charles F. Adams (DDG 2), a potential museum ship in Jacksonville, FL. After loading up tools and supplies (no cameras allowed on board!) the four made their way up to the bridge and surveyed the scene. Creekman and Moses are both retired surface warfare officers, veterans of the Cold War, so the equipment on board was a familiar sight.

Surprisingly, despite having been decommissioned three decades ago, and pored over by museum ships looking for useful equipment, Forrest Sherman was full of exactly the kind of gear needed for the Lion’s Den exhibit. Of particular interest were internal communications equipment, such as sound powered phone jack boxes and handset cradles. The team was also on the lookout for speakers, radio circuit boxes, and wall mounted aluminum document holders. A quick survey of the bridge and CIC turned up a bounty of precisely the type of equipment that was needed. The morning was spent loosening and dismounting equipment. Many of the bolts and screws had decades of corrosion and paint holding them fast, but the NHF team made quick work of them. In fact – aside from one stubborn overhead loudspeaker with screws painted solid that had to be cut off – all of the equipment came off with nothing more than muscle and determination. By lunch, the team had loosened all of the screws and prepared everything for final inspection of wiring, and removal by INACTSHIPOFF electricians in the early afternoon.

After a quick bite to eat, Creekman, Moses, and Colamaria met back with their escort Spaeth, and rendezvoused with electricians Chris Savoy and Harry Wilson for the final work. The electricians inspected the components designated for removal and then determined the best way to cut the remaining wiring. Fortunately, despite the fact that electricity still flows in the ship (including working outlets which were crucial to powering the tools and lights used in the removal efforts) none of the selected equipment had juice flowing, and the electricians made short work of the wiring. All that was left was to haul nearly 10 bags of equipment down two decks and off the ship for transport back to the Washington Navy Yard. After officially signing for the transfer of the gear with INACTSHIPOFF, the team dispersed and headed home. The equipment has since been photographed and shipped off to Design and Production, Inc, for inclusion in the exhibit. We look forward to seeing it again when it is part of a brand next exhibit for the National Navy Museum this summer.

Some of the gear salvaged from destroyer ex-USS FORREST SHERMAN 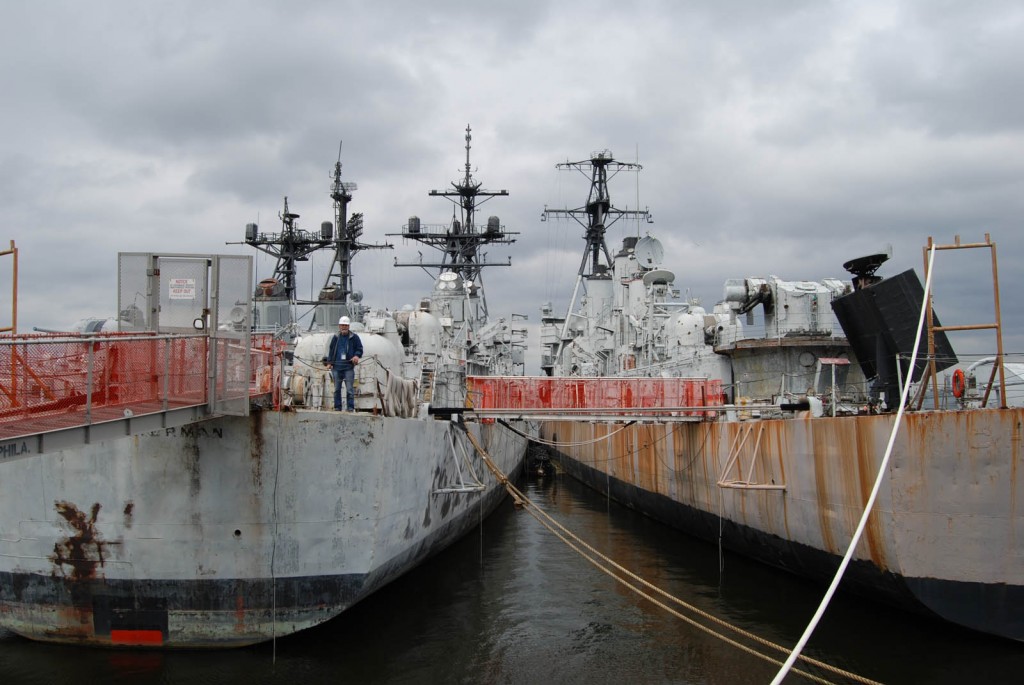 NHF volunteer Jim Moses on board ex-USS FORREST SHERMAN, with ex-USS EDSON in the background to port and ex-USS CHARLES F. ADAMS to starboard.