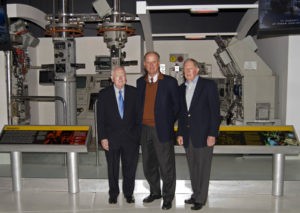 Dr. Robert Ballard, an educator and undersea explorer best known for his rediscovery of the wreck of Titanic in 1985, met with Naval Historical Foundation leadership at the Washington Navy Yard on Tuesday, 10 April 2012. Dr. Ballard serves on the Foundation’s Advisory Council, and was here to discuss educational programs and the opportunity for partnership between Ballard’s Institute for Exploration, the Foundation, the Navy’s Undersea Archeology Division, and Navy Museum educators. Ballard met with NHF Chairman Admiral Bruce DeMars, USN (Ret), NHF President Vice Admiral Robert Dunn, USN (Ret), and NHF STEM Program Director Captain John Paulson, USN (Ret). The meeting took place in the Navy Museum’s Cold War Gallery Education Center. After a full tour of the Cold War Gallery, Dr. Ballard sat down to give a brief on the history of his explorations, the Navy’s role in supporting his efforts through the Office of Naval Research, and the importance of continued research in our extended continental shelf areas. From February to May 2012, Research Vessel Okeanos Explorer is underway in our coastal areas, and may be observed “live” at www.nautiluslive.org or at oceanexplorer.noaa.gov. Later this year, summer explorations in the Black Sea and Mediterranean Sea will be carried live on www.nautiluslive.org.

In May of 2012, the Foundation plans to launch an improved Educational Center in the Cold War Gallery, part of the National Navy Museum at the Washington Navy Yard. The first new educational component is a 3D theater for the Mission Ocean Program, being piloted in the Washington DC area by four Prince William County schools. The culminating missions will be conducted at the new theater. The overall focus of the Center will be STEM-H: Science, Technology, Engineering, Math, and History. In the near future, the Center will also feature an “ECC” Exploration Command Center carrying live sea research from both Okeanos Explorer and Dr. Ballard’s Research Vessel Nautilus. Complete with educator’s-at-sea, the multimedia learning tool coordinated by the Inner Space Center at the University of Rhode Island allows mentored students at museums and boys and girls clubs, or independent students on-line around the world, to interact with real-time undersea exploration missions. Last year, during the inaugural Naval Historical Foundation summer STEM teacher fellowship program, the progress of the vessels’ summer research season was followed closely. The Center will also serve as the base of operations for a 2012 STEM-H Teacher Fellowship Program where history teachers have been added to the fellowship teams to accurately capture the history of the Navy, which is fundamentally the history of technology.

We thank Dr. Ballard for taking the time to visit with us – especially given the flurry of activity this week surrounding Titanic. This weekend (15 April) marks the 100th anniversary of the tragic sinking of the luxury liner, and Dr. Ballard continues to be a leading spokesman on the topic.