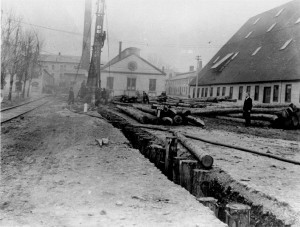 The Cold War Gallery of the U.S. Navy Museum is located in Building 70 on the Washington Navy Yard in southeast DC, overlooking the Anacostia River. In the early twentieth century the building housed the first naval towing tank facility. The Experimental Model Basin (EMB), the first in the United States, was constructed beginning in 1897 as a testing and scientific research facility intended to aid the shipbuilding industry. The brick building, 500 feet long by 50 feet wide, held a 1,000,000 gallon tank of water 470 feet long, 14 feet deep at the center. Runs began at the south end of the building, facing the Anacostia River, where the water was shallow. The bottom of the EMB was made of layers of stone, concrete, and asphalt. The side walls were filled in 40 foot increments of concrete resting on piles, 6 feet thick at the bottom and approximately 4.5 feet thick at the top. The exterior of the building on the quay was constructed of red brick with a monitor roof. The east and west elevations were windowless.

Progress is made, one year later (Left). Note the monitor roof at right. NHHC Photographs.

Rear Admiral David Watson Taylor championed the design for the Navy’s first test facility while serving as Naval Constructor, to which he was appointed on 5 December 1891. Taylor graduated from the Naval Academy in 1885 and from the Royal Naval College in 1888. He was awarded highest honors from both institutions. Taylor convinced Congress to appropriate $100,000 to construct the EMB. Completed in 1899, Taylor was able to use the facility to conduct experiments identifying the characteristics of ship’s hulls that determine resistance in water. These experiments yielded Taylor’s The Speed and Power of Ships in 1910. Taylor’s findings revolutionized American shipbuilding.

Models constructed of wood and covered with a varnish to ensure against leaks were tested in the basin. Paraffin was typically used in model construction, but the summer heat in Washington caused the paraffin to lose rigidity and shrink resulting in irregular test results. The models were ballasted with lead displacement. Trolleys positioned just above the track supplied power to the electric carriage which towed the model ship hulls. The hulls were attached to the carriage by a spring, to allow for natural movement, and the carriage ran across the tracks on eight driving wheels. Four motors, one for every two wheels, controlled the speed of the carriage. The carriage was designed by the William Sellers Company and the electrical installation was facilitated by General Electric. Access to the facility was not limited to the U.S. Navy; private shipbuilders could gain access to the EMB, provided that they paid the operating cost. More than 2,000 ship models were tested in the EMB. Ship models were not the only feats of engineering tested. Aircraft catapults and seaplanes were also tested and built in the EMB which also served as the United States’ first wind tunnel to test the aerodynamic properties of airplane models.

The EMB was used by the Navy until World War II, when hull testing was moved to a new location. Carderock, MD offered advantages that were unavailable at the Washington Navy Yard. The original EMB had been built on unstable landfill, while Carderock featured solid bedrock  – essential for precise scientific calculations. Additionally, the EMB was built just yards from the Anacostia River, which has a tendency to flood and overflow its banks from time to time. By the time the Washington Navy Yard was nominated for the National Register of Historic Places, a status it achieved in 1973, the EMB had been filled in and the building was used as storage space. The building now hosts the Cold War Gallery of the National Museum of the United States Navy, educating visitors about an understudied yet crucial era of American history and Naval service.

Building 70, now and then. At left, the towing tank of the EMB. At right, a recent photo looking into the South Hall of the Cold War Gallery.

To learn more about the important role the Experimental Model Basin played in the early days of Naval Aviation, don’t miss the story penned by NHF President VADM Robert F. Dunn, USN (Ret) in the Fall/Winter 2010/2011 issue of “Pull Together,” which you can read online here.