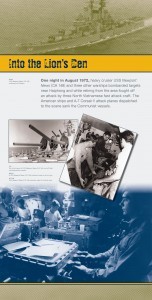 Story Panel for "Into the Lion's Den"

Design and Production, Inc., a leading builder of large, complex museum exhibits, has been contracted to build “Into the Lion’s Den,” a new Cold War Gallery exhibit at the U.S. Navy Museum. Scheduled for completion by June 2012 as commemoration of the 50th anniversary of the war in Vietnam begins, “Into the Lion’s Den” describes the history of two events: Operation Sea Dragon, the shelling of coastal targets in North Vietnam by Navy and allied warships, and “Lion’s Den” the August 1972 night bombardment of Haiphong harbor area targets by a four ship Navy flotilla. Large caliber projectiles, photographs, and ships’ artifacts highlighting coastal engagements will provide an overview for museum visitors, who will then enter the reconstructed armored bridge area of USS Newport News (CA 148), a heavy cruiser with three triple 8-inch gun turrets. Recorded sound, simulated gun flashes, and a reverberating deck structure complete with helmsman, phone talkers, and an officer in battledress will be viewed by the visitor who sits in the captain’s chair while listening to actual recorded communications and gunfire from the main battery, experiencing a re-enactment of the engagement described below.

Under the tactical command of Commander, Destroyer Squadron 25, heavy cruiser USS Newport News (CA 148), guided missile light cruiser Providence (CLG 6) and destroyers Robison (DDG 12) and Rowan (DD 782), were ordered to shell ammo dumps and air defense sites on the coast of North Vietnam near the major port of Haiphong. Less than an hour before midnight on 27 August 1972 the four warships moved within three miles of shore and opened up with their 8-inch, 6-inch, and 5-inch guns. Enemy shore batteries returned fire; some of the 300 shells they fired fell dangerously close to the American ships but failed to score any hits. 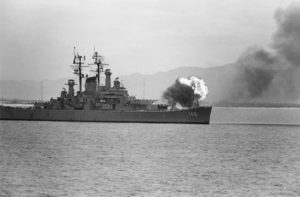 As the U.S. task group completed its mission and retired to the east, a trio of North Vietnamese P-6 torpedo boats suddenly emerged from nearby islands to ambush the Americans. The U.S. ships immediately opened fire against this new threat. Vice Admiral James L. Holloway III, the Seventh Fleet commander who was on board Newport News that night to observe the operation, then radioed in the blind for attack aircraft support using his personal call sign, “Blackbeard.” USS Midway (CVA-41) based A-7 Corsair II jets arrived overhead, lit up the sea with flares, and along with gunfire from the surface ships, sank all three of the enemy fast craft in this dramatic nighttime battle.

“Into the Lion’s Den” will be the third exhibit constructed for the Navy Museum’s Cold War Gallery. It follows the “Covert Submarine Operations” exhibit completed in June 2011, and the Central Gallery and Ready Room Theater, completed in 2010. Remodeling of Building 70, the Navy’s original Experimental Model Basin, to house the gallery was completed in 2004, and the design for the many planned exhibits describing the Navy’s 1945 – 1991 Cold War operations was finished in 2010. Completed design and constructed exhibits can be previewed at www.usnavymuseum.org. Building 70 is co-located with the display ship USS Barry and the main Navy Museum building 76 along the Anacostia River at the historic Washington Navy Yard. Please contact the Naval Historical Foundation for information on visiting the Cold War Gallery.

Below, you can watch a short video appeal from our President, VADM Robert F. Dunn, USN (Ret). VADM Dunn explains the battle, as well as plans for the exhibit. The video also features audio recorded during the battle, including the concussion of naval gunfire.

We need your help to make this exhibit possible. Please consider making a tax-deductible donation today, through our Fundly donation page, which can be reached by clicking the “Donate” button below. And please spread the word to others who might want to help us build this exhibit to help recognize the U.S. Navy’s role during the Vietnam War.