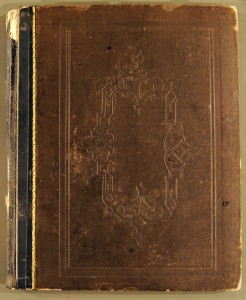 In September 1861, with the American Civil War five months old and showing signs of becoming a protracted conflict, Dr. Ezra Pray, practicing medicine in New England, applied for and was granted a naval surgeon’s appointment.  Pray had been born on 13 March 1832 in Rochester, NH, son of farmer Ezra H. Pray and mother Hannah Tebbetts. At 29, Dr. Pray was described in his enrollment record as 5 feet, 10 inches tall, light complexion, light blue eyes and brown hair.

With his appointment effective 21 October 1861, Pray was designated an “acting assistant surgeon” and ordered to report to the U.S. Bark Fernandina in New York City, where he arrived a week before that ship was commissioned on 16 November 1861. This wooden sailing vessel had started commercial life as the Florida, built in New Jersey in 1858, with an overall length 115 feet, beam 29 feet, draft 10 feet, and displacement of 297 tons. Purchased by the Navy on 29 July 1861 for $14,000 and renamed Fernandina (a town in Florida), she was refitted for naval service, sailed with a complement of 86 men, and was armed with six 32-pounder muzzle loading cannon. She was commanded by Acting Volunteer Lieutenant George W. Browne, who was coming to this assignment with limited previous naval experience in the young war.

Pray’s 154-page journal begins with his application for appointment in September and his service in Fernandina from November through 18 April 1862; however, he actually began to write his account in late January through early February 1862, using the ship’s official logbook to remind himself of the key events of his first few months on board.  Thus the journal begins retrospectively until going “live” in February.

Sailing from New York City on 27 November 1861 for duty with the North Atlantic Blockading Squadron, Pray and his ship arrived on station off Wilmington, NC on 14 December (after stopping off in Hampton Roads, Virginia briefly to receive orders from the squadron commodore). Pray described the experience of going to sea for the first time from his landlubber’s perspective, including observations about the sea, the ship, and his sea-sickness.  (See attached maps of Hampton Roads, VA and Wilmington, NC).

The first few months revealed the monotony of blockade duty, punctuated with occasional threats not so much from rebel forces but more from the rough winter weather at sea and the ever-present danger of running aground on the lee-shore and shoals of the “Graveyard of the Atlantic” coast. While Pray was a conscientious doctor who looked after his shipmates with compassion and professionalism, he was clearly hoping for the excitement of combat and the opportunity to share in prize money for capturing blockade runners.  Christmas day, 1861, brought Fernandina’s first success in this area, as she took blockade runner William H. Northrop as a prize with a cargo of drugs and coffee.

Within the first few weeks of his five month service in the bark, Pray began to clash with his commanding officer, Lieutenant Browne.  As he became more familiar with Navy life, Pray came to the conclusion that Browne was a martinet, incompetent to command, and incapable of keeping his crew safe and motivated to accomplish their wartime mission.

Matters reached a crisis when, in the late hours of 4 April 1862, Pray was awakened by a crewmember with a frantic “Doctor, get up! Captain has killed a man!” Responding to an altercation on deck, he found the captain and a crewmember slightly injured, and witnessed Browne shooting drunken sailor John Hillman in the abdomen while Hillman was being restrained by another sailor. Certain that his crew has mutinied, Browne’s actions as reported by Pray, even as Pray tried to save Hillman’s life, revealed the rapidly deteriorating discipline and respect for authority so necessary for maintaining order at sea. Dispatched first to Hampton Roads, and then to Baltimore, Maryland (because the hospital ship in Hampton Roads was filled to capacity with the sailors wounded in the previous month’s epic battles between Confederate ironclad CSS Virginia and USS Monitor and Union navy blockading ships), Fernandina’s arrival on 16 April preceded Hillman’s death by one day, and the Navy Court of Inquiry “to inquire into the circumstances of a Mutinous riot and affray…” by 5 days. 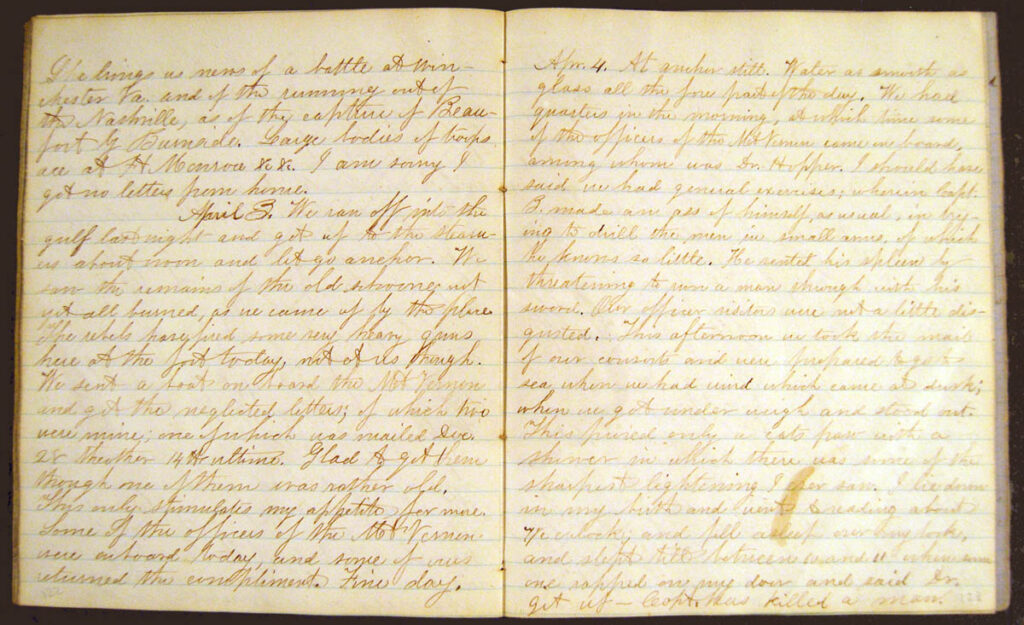 That court adjourned on 2 May 1862, finding that “There was not at the time of the shooting of John Hillman, nor had there been, anything which can properly be called a mutiny on board the ship, nor did the officers who witnessed what occurred on deck, regard the ship as in a state of mutiny, except the captain, who seems so far to have lost his self-possession as to magnify the noise and violence of three drunken men into a mutiny, and even to suspect, without reason, that some of his officers were in collusion with this imaginary mutiny.  It was this entire misapprehension by the captain of the nature of the disturbance, which alone extenuates the gravity of his fault in shooting John Hillman, which was wholly unjustified by any real existing danger to himself, or to the ship.”

Acting Lieutenant Browne was disrated to Acting Master on 14 May and reassigned ashore. He subsequently was assigned in June 1862 to command the brig Bohio.  By March 1864 he was on sick leave and his appointment was revoked the following month.

Having filled up all available pages, Pray concluded his journal by announcing his intention of sending it home for the benefit of friends and family.  Reassigned in June 1862 to the US steamer Cambridge, Dr. Pray continued his medical service in that and several other Union warships until his honorable discharge on 1 March 1866.

Pray married Martha J. Hanson of Somersworth, NH on 16 Aug 1865 and they had two sons.  Pray, having returned at some point to farming, received a pension for his military service, as did his widow some years later. Fracturing his femur in a fall on ice, Pray died 4 Apr 1918, age 86, at Rochester, NH. 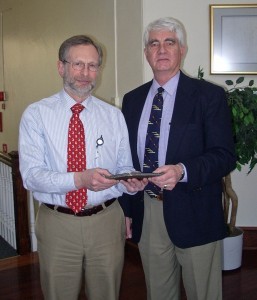 At some point the journal (which nowhere mentions its creator, Ezra Pray, by name) passed out of the custody of the Pray family.  A later owner of the journal taped a handwritten note to the inner cover, reporting: “A hand written diary of Civil War—found among Sid’s things. A Navy Dr. wrote it. Valuable, keep. A neighbor of Sid’s burned the rest of set.” No other writings of Dr. Pray have yet come to light.

Apprised of this unique naval history artifact coming available on the market during 2011, the first year of the Civil War Sesquicentennial, the nonprofit Naval Historical Foundation (NHF), itself celebrating 85 years of “preservation, education and commemoration of naval history,” determined to acquire the journal to ensure it would remain accessible to historians and the American public.  With the generous support of Board member and former Secretary of the Navy Ambassador J. William Middendorf II, former NHF vice president Vice Admiral George W. Emery, USN (Ret.) and the Foundation for the History of Navy Medicine, the NHF purchased the journal for $4,500.00 (NHF collection accession number 2011-004).  The narrative was scanned and transcribed, with the original donated to the collection of the U.S. Navy Medical Department Office of the Historian in Washington, DC.  A copy has been donated to the Naval History and Heritage Command’s Histories and Archives Division, Washington Navy Yard, DC.

A note about the transcription; Pray’s original grammar, punctuation, capitalization and spelling have been retained in nearly every instance. Several illegible words are indicated with underlined blanks in the narrative. Pray’s asides are indicated with his own (  ). Explanatory asides inserted by NHF are indicated by [   ].

References: (which contributed to the background section and to the transcription of Pray’s narrative)

Register of the Commissioned, Warrant, and Volunteer Officers of the Navy of the United States, including Officers of the Marine Corps and Others, to January 1 1863. Washington: GPO, 1863. Page 163, Browne; page149, Pray.