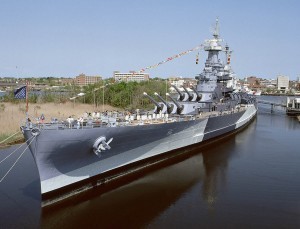 The age of the battleship has passed into history, but along the coasts of the United States are reminders of this dramatic era in naval history. Nestled in Wilmington, NC, is the battleship ex-USS North Carolina (BB 55), moored on the Cape Fear River. Commissioned in 1941, she was awarded 15 battle stars during World War II, and was decommissioned in 1947. She was transferred to the state of North Carolina, towed to her present location on the Cape Fear River, and opened as a museum ship in October 1961, with a dedication following in April 1962. In 1986, the battleship was declared a National Historic Landmark.

North Carolina‘s visual appearance is unique amongst the remaining battleships. She seems to rise up out of the landscape of the trees and tall grass surrounding her on the Cape Fear River. Her distinctive camouflage paint scheme often surprises those who think of warships as monotone grey behemoths. Behind her steel bulkheads looms another surprise: fully functioning radio equipment. Through a partnership with the Azalea Coast Amateur Radio Club (ACARC), the ship’s original transmitters, cabling, and antennas are used to transmit ham radio signals, under the call sign NI4BK. The equipment will be in operation for the North Carolina QSO Party, scheduled for 26 February 2012, from noon to 10PM. Anyone who hopes to make contact will need a general coverage short wave receiver, with both CW and SSB (Single Sideband) capabilities in the 7 and 14 MHz frequency ranges.

Restoring this World War II era communication equipment was a labor of love, and required close collaboration between the ship’s staff, volunteers, and ACARC. In 2000, the club (which had been operating their own equipment set up for special events in the Navigator’s Sea Cabin on the Bridge Platform since the late 1990’s) was asked to move to a new location on the ship. ACARC member Carl Filipiak asked Museum Services Director Kim Robinson Sincox about restoring Radio 2 and having the club operate there. It was decided that an attempt would be made to restore the old World War II radio equipment to working condition. Volunteers from the club had previously restored the ship’s 1MC system allowing for announcements and music, as well as old style rotary telephones allowing communication between portions of the ship.

Carl Filipiak and Jack Jacobs from ACARC were involved in the early restoration efforts, and were joined over the years by others including Allan Pellnat, Norm Clemmons, and Bill Usher. The first step in the restoration project was to splice into existing wiring to see if the ship’s antennas could be reactivated. Maintenance Supervisor Terry Kuhn was able to splice into the battleship’s 60 year old coaxial wiring. After some cleaning and re-patching of cords, the club’s modern radio equipment was able to operate successfully through the World War II era wiring and antennas. With the success of this first stage of the restoration, the next step was to take a look at the original transmitter equipment. The TBM-4 transmitter was chosen as the first project. This large piece of equipment sits in two six-foot bays. Both the TBM-4 and TBK-7 were primarily used for “continuous wave” (C.W.) transmission – Morse Code. The TBM-4 is also equipped with a separate modulator unit for “amplitude modulated” (AM) voice or “modulated continuous wave” (M. C.W.) transmissions. The transmitter and accompanying equipment were dirty, damaged, and inoperative, but all of the major components were still in place. The repair crew set to work in an attempt to bring it back to life.

The first step was to test all of the wiring insulation for high voltage breakdowns. Next, switches had to be cleaned, and all plug-in components such as high power resistors and fuses were also cleaned and properly re-seated. All of the connections under screwed or bolted terminals were inspected to make sure they were secure. Motor-generator bearings were lubricated, and their brushes and armatures were inspected. After a series of fits and starts lasting more than a year, they finally had the transmitter functioning in November 2001. One of the first radio operators the team connected with in early 2002 was Richard “Mac” McCullough, callsign W1SRR. McCulloch was a North Carolina plank owner, and served as a radioman in Radio 2 throughout the entire period of her commissioning. He remained in contact with NI4BK until he passed away two years ago. 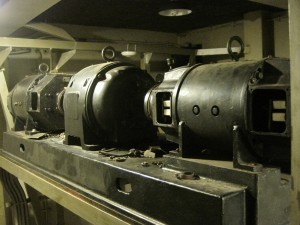 Restoration work has continued almost continuously. The TBK-7 transmitter was brought online in 2009. Yet despite their many successes, the volunteers leading the restoration work always have a never-ending series of projects awaiting them. Fortunately, many of the internal components of the radio equipment are still in common use in modern high voltage, high power applications. Other than some minor corrosion problems in switches and controls, the biggest problems have been with the motor-generator sets which provide the high DC voltages that the gear requires. After being dormant for more than 60 years, the motors tend to start up and run fine for a short time, but then develop various problems requiring that they be dismounted and sent out to a motor repair shop. At present, the high voltage motor-generator sets for both the TBM-4 and TBK-7 are out of commission, awaiting removal to the repair shop. This leaves the operators with only the TDE transmitter (a slightly later vintage, installed on board BB 55 in 1944) with a lower power capability.


Radio operators communicate with one another through the use of callsigns. The amateur radio callsign NI4BK is a special vanity callsign acquired from the Federal Communications Commission, and is based on the original BB 55 Navy callsign NIBK. When the transmitters on board the battleship are operating, amateur radio operators within range who hear the callsign NI4BK quickly realize that they’ve made a special connection. Whenever the ACARC volunteers put the ship on the air, they quickly acquire a “Pileup” of stations calling them. When amateur radio operators perform a successful 2-way contact, it is customory to exchange a “QSL” postcard. QSL is a radio code meaning “I confirm receipt of your transmission.” Battleship North Carolina‘s QSL card bears a photo of BB 55 underway.

The QSO Party is an annual ham radio contest that occurs over one weekend each year in each of the 50 states. QSO is a code that means “can you communicate with?” The object of the contest is for ham operators around the world to contact as many of the counties within that state as possible. Each county contacted earns points, and contact with certain special event stations within a county earns additional bonus points. The North Carolina QSO party in late February 2012 includes the 100 counties in North Carolina, plus four Bonus Point special event stations, of which BB 55 is one. Operations from the ship typically run from early Saturday morning until late Sunday afternoon, using voice transmission from modern solid state equipment in the Radio Central area connected via original cabling to one or more of the ship’s original antennas. They concurrently operate the original equipment in Radio 2 (Third Deck, not on the public tour route) using C.W. (Morse Code) transmission. Club members stand by in the Radio Central area to explain to tourists what is happening. The radio operators typically log several hundred two way contacts throughout the US and Canada – as well as many other foreign countries – over the course of the QSO Party weekend.

In mid-summer the radio operators participate in Museum Ships Weekend. This involves 70 or more museum ships throughout the world, operating with original and modern equipment. Warships such as North Carolina are involved, but other civilian museums ships such as a Great Lakes ore carrier and lightships take part. The ships try to contact each other as well as other ham stations throughout the world.

To learn more about the Battleship North Carolina, please visit their website. And if you are on the air, keep a listen for NI4BK! 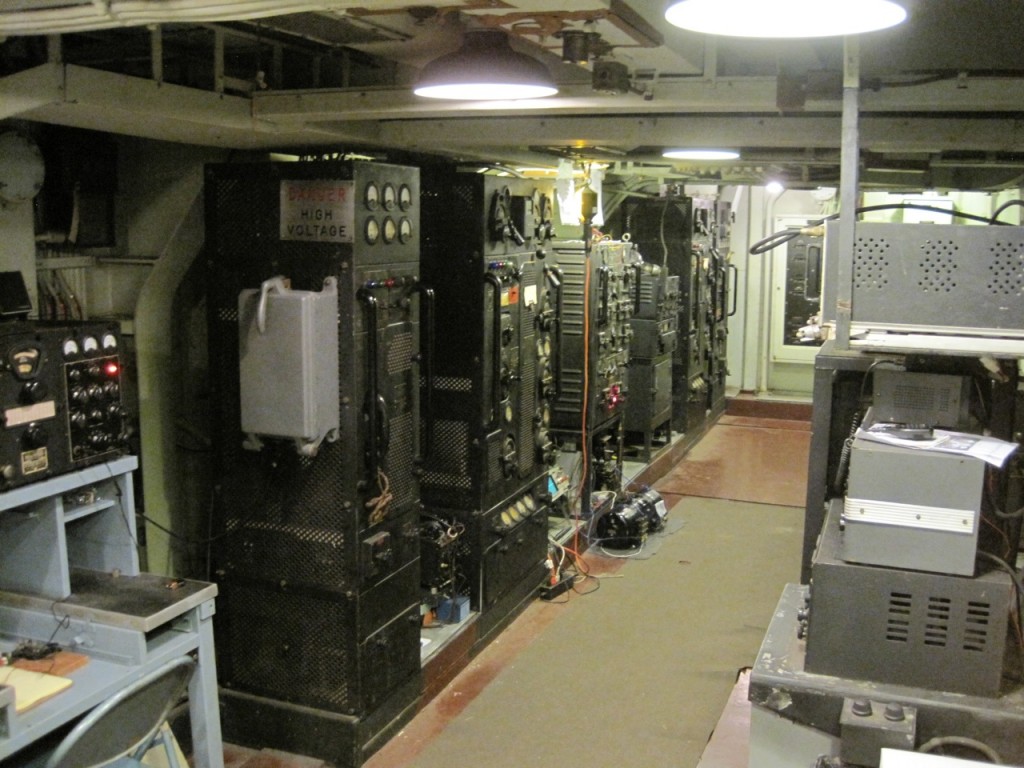 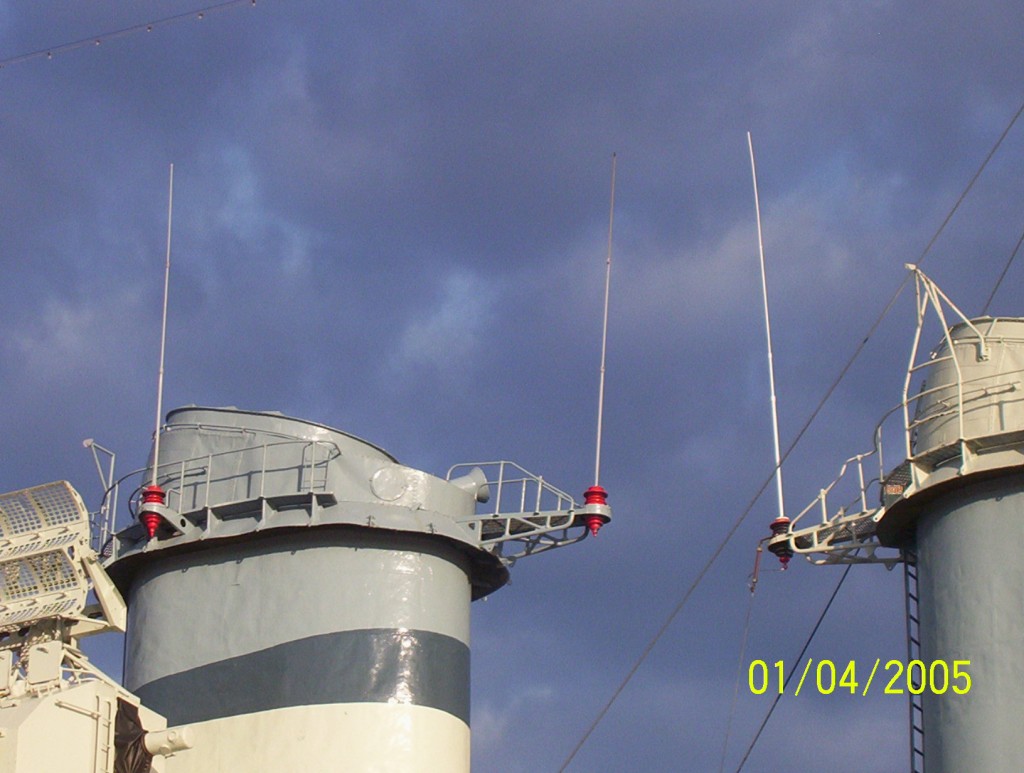 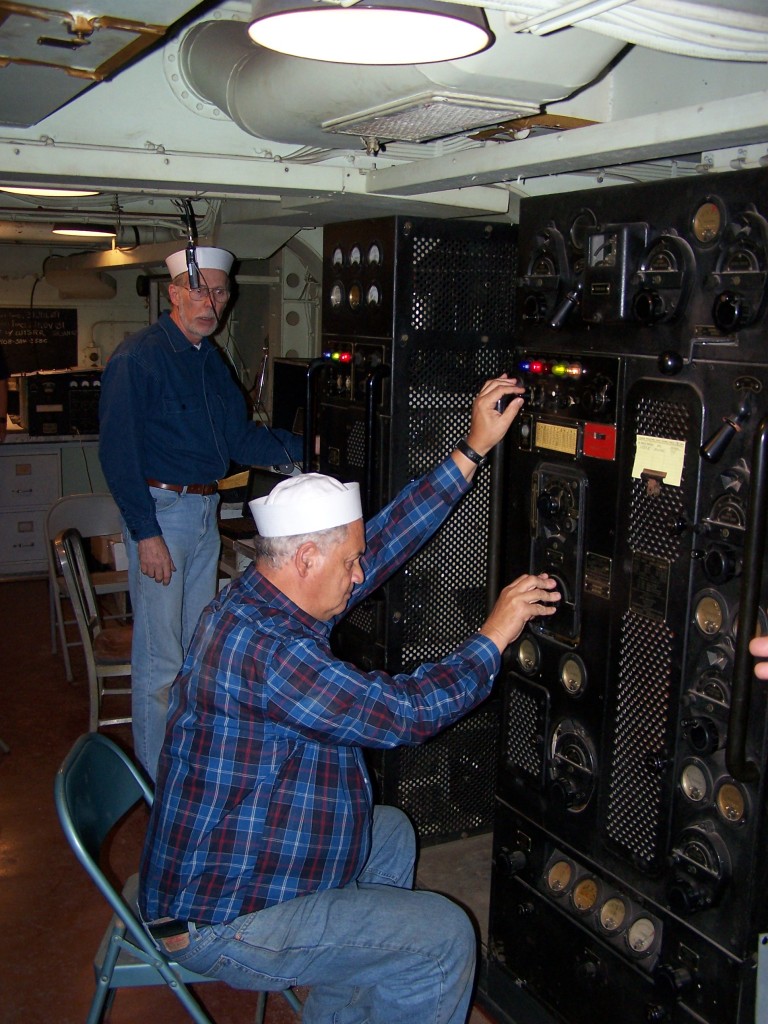 Jack Jacobs (sitting) tunes up the TBM-4 while Allan Pellnat (standing) listens to the signal on an RBC WWII era receiver.