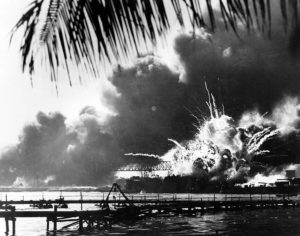 The forward magazine of USS SHAW (DD-373) explodes during the second Japanese attack wave. Footage of this explosion can be seen in the video below at about 2:16. Naval History and Heritage Command NH 86118.

Iconic images of U.S. Navy warships under attack and on fire at Pearl Harbor on 7 December 1941 are seared into the collective American memory. Yet the total amount of moving picture footage of the surprise Japanese attack in Hawaii is limited, with the same shots often repeated over and over again. Rare footage shot by CWO4 Clyde Daughtry from the deck of USS Argonne (AS 10), moored at the 1010 dock on that tragic day, remains one of the best pieces of filmed material of the attack. Unfortunately, the original copies of that film disappeared in the late 1960’s. What remains are a few badly deteriorated copies of a copy, one version of which remains in the collection of the Naval History and Heritage Command. In 1982, Don Montgomery of the Defense Audiovisual Agency, after years of investigation and correspondance with Daughtry, came upon a decent quality copy of the film at the Naval History and Heritage Command (at that time the Naval Historical Center) in Washington, DC. This copy of the film was found in the donated collection of Captain Mell A. Peterson, Jr., who had obtained it from his father, and it was the only known version of the film to exist. It is thanks to Montgomery’s foresight that we have the ability to watch any version of this film at all. He made six additional copies of the footage for safekeeping, donating one copy to the National Archives. The quality of this version of the film is uneven. Much of it is faded badly (the original footage was in color that has long since deteriorated), but you can still make out many key moments of the battle, including the battleship USS Nevada (BB 36) underway and firing back at the Japanese attackers.

Here’s a breakdown of what you’ll see in this film:

0:54 – 1:21: USS Nevada underway and past the 1010 dock trying to reach open sea, being attacked with her guns firing back, she turns left and runs aground at Hospital Point. In the foreground, Oglala rolls over and sinks

1:22 – 2:05: Camera pans down Battleship Row again, showing West Virginia settling in with decreasing list, upturned hull of Oklahoma, with USS Maryland (BB 46) behind her. USS Tern (AM 31) is moored in foreground at 1010 dock. USS St. Louis (CL 49) can be seen briefly heading down the channel firing her guns.

2:55 – 3:00: Capsized Oglala sunken in foreground, while Shaw burns in the background

3:05 – 4:08 : More views of Battleship Row and Ford Island, including California low in the water after torpedo hits