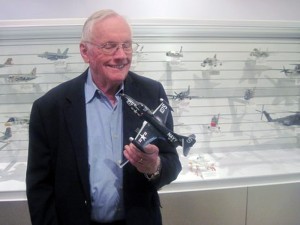 The Cold War Gallery at the Washington Navy Yard played host to a surprise visitor on Friday – Neil Armstrong, the first man to set foot on the moon. He stopped by for a private visit, arranged by his friend Captain Ted Bronson, USN (Ret). Armstrong has a personal connection to the Gallery. A model of his F9F-2 Panther from the Korean War is on display in the Gallery’s aircraft model case. Armstrong generously sponsored the construction of the model, which was built by Michael McLeod.

Armstrong’s love of flight began as a teenager, and was soon followed by service in the United States Navy, as a naval aviator. He served in the Korean War, flying with VF-51 off the aircraft carrier USS Essex (CV-9) with squadron mate then-LTJG Tom Hayward, who later served as Chief of Naval Operations. Armstrong flew 78 missions over the skies of Korea, and was awarded numerous decorations. The Panther model on display in the Gallery is modeled after one that Armstrong flew during the war. Following his service with the Navy, he became a renowned test pilot, and then went on to lasting fame as a NASA astronaut and moon-walker. 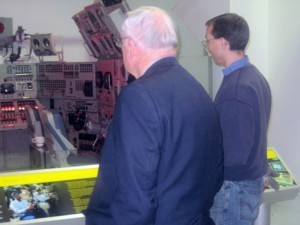 Armstrong was in town for an event with other astronauts, and carved out a chunk of time for a tour of the Cold War Gallery. In addition to a close look at the detailed F9F-2 model, he had the chance to view the other exhibits and displays in the Gallery. Bill Hill from the Curator Branch of the Naval History and Heritage Command was on hand during the visit, and gave Armstrong a personal guided tour of the Gallery. Hill previously worked for the Foundation, and was intimately involved with the planning and design of the Gallery, thus he was well suited to escort this distinguished visitor. They had a chance for a full walkthrough of the Covert Submarine Operations exhibit, and a close look at the massive model of the aircraft carrier USS Forrestal (CV-59). For full virtual tour of the Cold War Gallery, please visit the usnavymuseum.org website. And for a good look at Armstrong’s incredibly detailed F9F-2 Panther model on display in the Gallery, please take a look at this Flickr photo album of the aircraft. We thank Neil Armstrong for his generous support of the Gallery, and for taking the time out of his busy schedule to stop by for a visit!