Every year, thousands of visitors flock to museum ships around the country. Most of these visitors have no idea of the endless care and upkeep required to maintain and preserve these decommissioned warships. Steel warships do not respond well to the moisture and humidity of marine environments. Compounding these issues inherent in any marine environment, museum ships are at a minimum many decades old; ex-USS Olympia in Philadelphia is over a century old. While in commission, a ship’s crew of hundreds – even thousands for aircraft carriers – is continuously occupied cleaning and maintaining their vessel. But museum ships are devoid of a crew, and have to rely on small staffs and dedicated corps of volunteers. Often, Navy veterans donate their time to a ship or class of ship that they served in, providing the kind of hands on knowledge that professional historians and museum staff can’t bring to the table.

We wanted to give our readers a taste of what it takes to maintain a museum ship on a regular basis. Tucked away in Albany, NY, is the Destroyer Escort Historical Museum, home to ex-USS Slater (DE 766). Slater was commissioned in May 1944, and served on convoy duty in both the Atlantic and Pacific during World War II.  She was decommissioned in 1947, transferred to Greece in 1951, and renamed Aetos. She served for 40 years in the Greek Navy, participating in NATO exercises, and even made a small cameo in the film The Guns of Navarone. Aetos was deactivated in 1991 by the Greek Navy, and was scheduled for disposal, when the Destroyer Escort Sailors Association stepped in to save her. Funds were raised, and the Destroyer Escort Historical Museum was established in anticipation of her return to the United States. In 1993, the stripped and rusting hulk of a ship was towed all the way across the Atlantic to New York City, where she remained until her 1997 arrival in Albany.

ex- USS SLATER/HNS AETOS, before and after. At left, the terrible condition of the ship in 1993 upon her return to the US after over 40 years in the Greek Navy. At right, a recent photo showing the remarkable restoration work. Photos courtesy of the Destroyer Escort Historical Museum.

For the past 18 years, staff and volunteers of the Destroyer Escort Historical Museum have been hard at work on an endless series of repair and restoration projects on Slater. The goal is to fully restore the ship to her World War II U.S. Navy configuration. This required the removal of all of the weapons, equipment, and machinery installed during her decades of Greek service, and the acquisition of authentic World War II destroyer escort equipment. Her interior had been stripped at the end of her service in the Greek Navy, and had to be reconstructed. For more detail on the restoration process, including the unique role played by ex-USS Gage (APA 168) as a donor of parts and equipment, please visit the organization’s restoration page. And if you aren’t aware of their monthly newsletter, Slater Signals, take a look at the online back issues. Each month, the organization provides an update on restoration and repair work, complete with photos of the work in progress. There’s even the occasional video, such as the clip below, showing Slater‘s restored RCA TBL-8 Transmitter:

According to Destroyer Escort Historical Museum Executive Director Tim Rizzuto, Slater staff and volunteers put in about 20,000 hours of work each year to maintain the ship – 15,000 by volunteers alone. Consider the monumental task confronting this dedicated group of people. While in commission, Slater‘s crew numbered over 200 sailors. By comparison, the Destroyer Escort Historical Museum has only 5 full time employees and 6 seasonal employees, to continue the difficult maintenance and repair work formerly done by the much larger ship’s crew. Consequently, they rely on a dedicated group of volunteers numbering about 200, many of whom travel from other parts of the country to help out. Like most museum ships, Slater no longer steams under her own power, so the necessity of keeping the engines in full working order is eliminated. And the need to feed and berth her crew is also eliminated. Obviously, the destroyer escort no longer fires her weapons, or uses any of her sophisticated electronics. But the structure of the ship – her hull, decks, and machinery – must be kept watertight and intact, as well as presentable to visitors. And the ship must not only maintain an attractive appearance for visitors, but must provide safe passage for those who want to walk her decks.

In addition to staff and volunteers, the Destroyer Escort Historical Museum also relies on the regular assistance of active duty sailors, and youth groups. Chief Petty Officers of the Nuclear Power Training Unit located in Ballston Spa, NY utilize Slater once a year when they bring down new CPO selectees for a volunteer work day of community service. NPTU also provides support by sending down work parties quarterly when the trainees are between classes. Closer to home, midshipmen from the Rensselaer Polytechnic Institute NROTC unit volunteer on board Slater to get hands on maintenance experience under the direction of experienced sailors, and also participate in ceremonial functions. US Naval Academy Blue and Gold Officers have utilized Slater as a site to conduct interviews of prospective midshipmen, to judge how they react to a shipboard environment. Slater also serves as the host to a wardroom dinner in which Naval Academy selectees from the area get to meet each other for the first time. These are just a few of the examples that show how Slater still has a role to play in today’s Navy.

As with all historic naval ships, the issue of hull preservation and maintenance of the underwater body is critical to the future of Slater. The last time the ship was in drydock was 1993, in preparation for the tow across the Atlantic from Greece.  The Museum has embarked on a fund drive to raise the money necessary to get the ship into drydock in order to assess the condition of the hull and conduct long term repairs. They hope to drydock the ship over the winter of 2012-2013. For more information please visit their website at www.ussslater.org for updates.

The series of photos below gives just a small taste of what is takes to restore and maintain a museum ship. We thank the Destroyer Escort Historical Museum for allowing us to share the images with you.

There's always something to be chipped and painted when maintaining a museum ship. At left, Ron Mazure leads a group of deck chippers working on SLATER. At right, Walt Stuart paints a non-skid ladder. Photos courtesy of the Destroyer Escort Historical Museum.

Plenty of heavy lifting can always be expected. At left, Chris Fedden supervises the removal of a TAJ radio transmitter, which was replaced by a more authentic unit (see video above). At right, Nuclear Power Training Unit students load depth charges onto the number six rail loader. Photos courtesy of the Destroyer Escort Historical Museum.

For some, restoration work is a family affair. Here, brothers Mike and Pat Zarem prep the inside of one of SLATER’s 40mm gun tubs for painting. Photo courtesy of the Destroyer Escort Historical Museum. 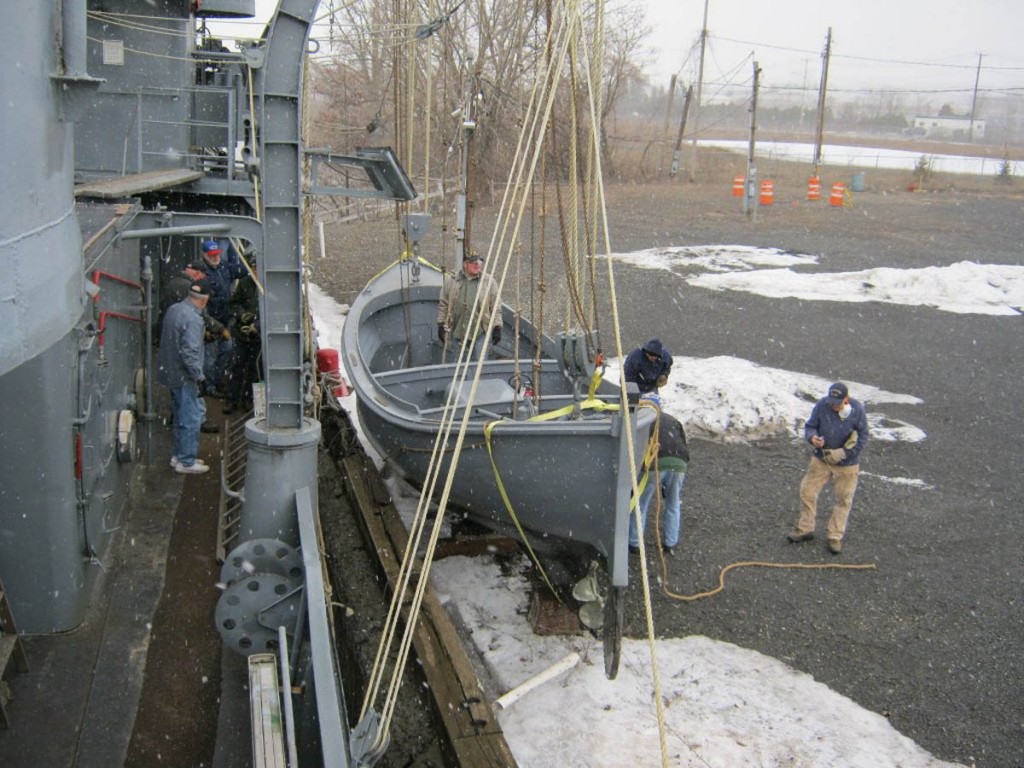 Restoration work on SLATER continues throughout the year, even in rough weather. Here, workers lower a whaleboat in the snow for some repair work. Photo courtesy of the Destroyer Escort Historical Museum. 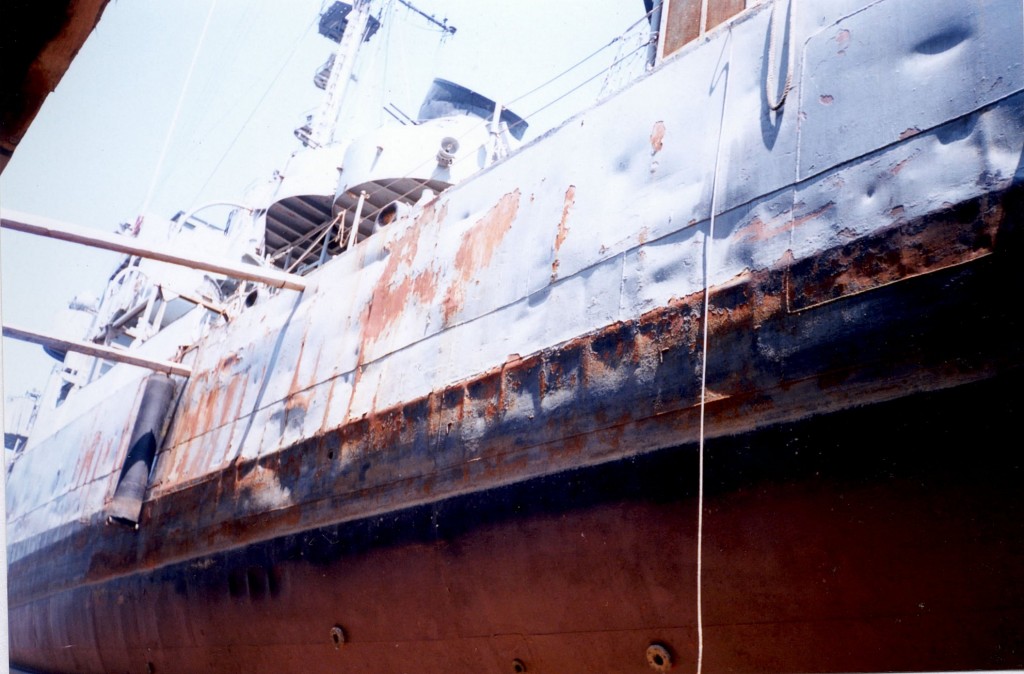 The waterline of SLATER photographed in 1993 showing the need for attention. Photo courtesy of the Destroyer Escort Historical Museum.

It takes dedicated volunteers of all ages to maintain a museum ship like SLATER. At left, Midshipmen from Rensselaer Polytechnic Institute assist in the restoration work of an electrical distribution board. At right, Chris Fedden, named the 2010 Capital District CPO Association SLATER Volunteer of the Year, for his years of dedicated service to the ship. Photos courtesy of the Destroyer Escort Historical Museum.

Are you interested in lending a hand? The hardworking staff and volunteers of ex-USS Slater can always use help. Even if you don’t know a thing about maintaining a warship, they’ll find a way to keep you busy and involved. There’s no better way to learn about naval history than volunteering to help preserve a historic ship. And if you’re in another part of the country, too far to help out the folks in Albany, check out the full list of museum ships belonging to the Historical Naval Ships Association. You might be surprised to find how close the nearest ship is to you, even in the most unexpected locations. You’ll find historic ships moored everywhere from coasts and lakes, to parks in the Great Plains.