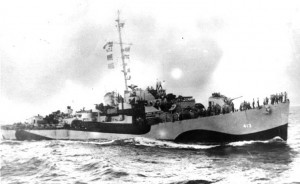 We recently learned about a new film project being developed about the Battle off Samar. An independent group of filmmakers is working on a virtual recreation of this pivotal American victory in the Pacific during World War II – one of the great “upsets” in naval history. This ambitious project is currently in the research and development process, with a targeted shooting date of 2013.

Rick Ellis, one of the team members, is a motion graphics designer who works on 3D modeling and computer generated graphics for Disney Cruise Line. In 2009, Ellis developed on interest in this crucial component of the Battle of Leyte Gulf through a conversation with his father. Wanting to learn more, he picked up a copy of Last Stand of the Tin Can Sailors, and was hooked. Ellis had previously worked with a group of talented filmmakers on a series of short films, winning some awards for their film “Square One“. Most of the team members are professionally employed in the film and entertainment industry, but they all had a hunger for their own big, independent project. The group tends to focus around producer/director Kurt DeVries. Ellis and DeVries met in 2007, and soon began to collaborate with director of photography Daniel Trout, lighting director David Main, assistant director Brooke Rodenhizer, and screenwriter Anthony Russo. They frequently draw on actors from the classes of Kathy Laughlin from the Casting Society of America – some of whom have gone on to roles in projects such as The Glades, Army Wives, Burn Notice, and various movies. Through them, the group connected with director of photography Jill Sager, whose background includes work for the History Channel.  This is but a sampling of the many other talented individuals have been involved in the group’s projects, collaborating on a variety of projects.

Ellis’ idea about the Battle off Samar was the project they’d been waiting for. This story of an overmatched group of American destroyers and destroyer escorts beating off a vastly superior Japanese force including battleships and cruisers is the stuff of naval legend, and was perhaps the linchpin to American victory at Leyte Gulf. The first step in the team’s work has been ongoing research on Taffy 3 and the battle itself. Jumping off from Last Stand of the Tin Can Sailors, they plunged into other history books such as Little Wolf at Leyte and the Battle of Leyte Gulf. But one book stood out to the team: The Spirit of the Sammy B, written by RADM Robert W. Copeland (USNR), commanding officer of the destroyer escort USS Samuel B. Roberts (DE-413). More than just a source for research, this account immediately gave the filmmakers the narrative thread they’d been seeking for their project. They contacted the book’s editor, who is himself the son of a Samuel B. Roberts survivor. They made contacts with others through the Samuel B. Roberts Survivors Association, including the organization’s former president, Jack Yusen. 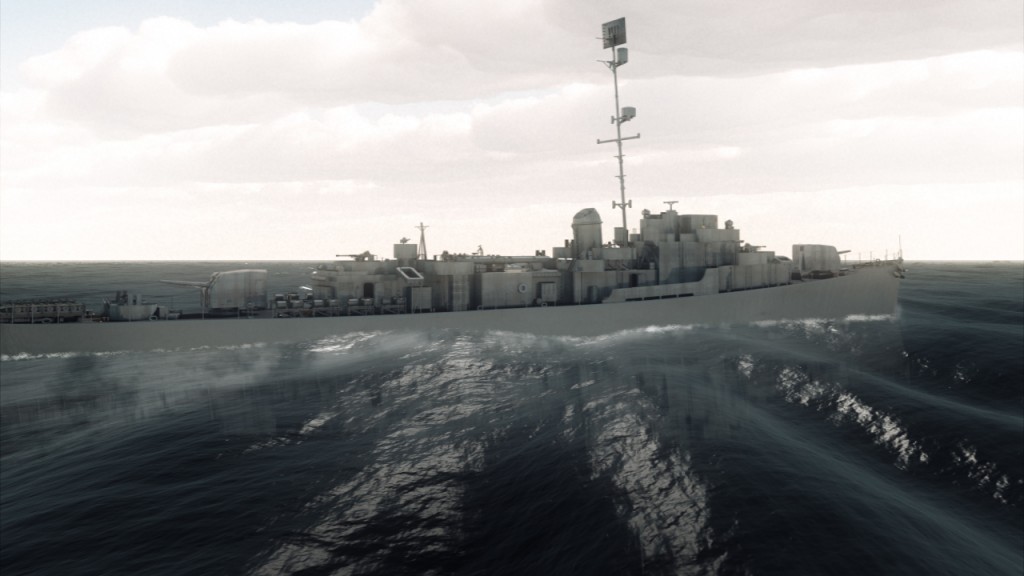 In addition to printed materials such as books and declassified After Action Reports from the battle, the project team has conducted an extensive search for visual materials. This includes blueprints and manuals for the ships and aircraft involved in the battle, and a mountain of film and video material. To date they have compiled 200 hours of reference footage – all of which has been watched repeatedly. They’ve also scouted out physical filming locations for scenes that will not be created digitally, but will instead be shot as live action footage. The team has visited ex-USS Slater (DE-766) in Albany, NY, and ex-USS Kidd (DD-661) in Baton Rouge, LA. They hope to use Slater as a stand in for scenes on board Samuel B. Roberts (see our earlier story about Slater here). Tim Rizzuto, director of the Destroyer Escort Historical Museum, home of ex-USS Slater, recently met with the filmmakers and offered suggestions on other possible shooting locations, such as the recreated island from USS Cabot (CVL-28) at the National Naval Aviation Museum in Pensacola, FL. Rick Ellis, who spends much of his time at sea on board cruise ships, is based out of Tampa, FL, and has been working with the Florida Aviation Historical Society to located Wildcats and TBMs for potential use in the film. They’ve even considered using the battleship ex-USS Texas as a disguised stand-in for the Japanese battleship Kongo.

Embedded below is a video showing some of the group’s complex 3D modeling work being developed for the film. The group used a variety of different source elements to develop this computer generated model of USS Samuel B. Roberts. To assemble the basic framework of the ship and hull, blueprints are used to establish dimensions and shapes, by tracing top, front, and side views. The basic outline is connected into a mesh. The individual components of the ship – the hull, weapons, hatches, etc. – are assembled one by one as three dimensional virtual models, and then connected digitally, much like a physical kit model is assembled. The next step in the process is to add the minute detail of textures and lighting, to make the basic 3D models look realistic. Ellis used a combination of blueprints, a kit model of a destroyer escort, and reference photos of ex-USS Slater to develop his detail and textures. The end result of this meticulous work can be seen in this video:

In the midst of all this research and location scouting, the team has been hard at work finalizing a draft of their script. The initial draft was finished in April 2011 and was circulated to others in the film industry for reviews, as well as Bob Cox who runs the Battle Off Samar website.  An improved draft is in the final stages, incorporating notes and comments from those who have had a chance to review it. Their goal is to present a responsible representation of the men who were there, as well as an accurate portrayal of the battle. They hope to complete this next draft by January 2012.

Looking forward, the biggest challenge the team faces is distribution. They are confident in their ability to raise funds for the project, but that means nothing without the means to distribute the finished project. Last month the team attended the American Film Market, a festival for movies that have not been made yet. According to Ellis, it is like the NFL draft of the movie industry. This gathering is the forum for filmmakers and movie distributors to meet and try to strike deals. The group made some promising connections who are eager to look at the final proposal for the film.

For more information on the movie please visit www.squidoo.com/the-battle-off-samar, or email Rick@SmartGyz.com.