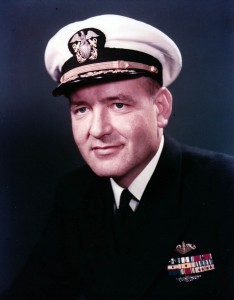 Slade Cutter (1911–2005) was a career U.S. naval officer and a legendary submariner. He gained early notoriety as an All-American football player at the Naval Academy, and was later named to the College Football Hall of Fame. As commanding officer of USS Seahorse (SS 304) he tied for the second most Japanese ship kills of World War II, sinking 19 enemy vessels. He was awarded four Navy Crosses for his exemplary wartime leadership. His life is documented in the Naval Institute Press book “Slade Cutter: Submarine Warrior,” written by Carl LaVo.

A few months before his death in 2005, the Naval Historical Foundation was contacted by his wife to see if there would be any interest in his correspondence files from his years with the submarine force in World War II. Dr. Dave Winkler of the NHF traveled out to their Annapolis nursing home and received a metal box with numerous letters that Cutter wrote to his mother detailing many of the actions that his submarine engaged in during the war. The letters are now held in collection of the Navy Department Library.

A sample of Cutter’s writings is found in a letter written days after the 7 December 1941 Japanese attack on Pearl Harbor. At the time he was the Executive Officer of USS Pompano (SS 181). Pompano would deploy on 18 December on its first war patrol. Despite the devastating blows, Cutter writes with an air of confidence and determination. His reference to the treatment of Japanese attackers in the wake of the attack is eyebrow-raising. Otherwise, the letter is one of comfort and assurance that must have reflected the content of thousands of other letters being written by sons to their mothers at the onset of war. 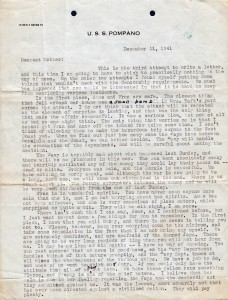 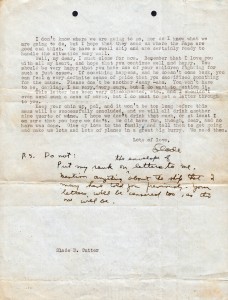 As we look towards the 70th anniversary of the Pearl Harbor attack, please visit our Events Calendar to see some of the remembrances and events being planned around the country.