In September we told you about “Wings for the Navy,” a documentary celebrating the Centennial of Naval Aviation, produced by R.H. Rositzke & Associates. The film-making team recently completed production on their newest documentary, about the American Civil War. “Civil War At Sea” is a 26 minute documentary about the U.S. Navy’s often-overlooked role in the Civil War. The production uses paintings and photographs from the era, along with narration, music and re-enactor footage, to cover five areas of the war where the Navy had significant impact: leadership, technology, strategy, policy toward escaped slaves, and the molding of the average sailor into a powerful fighting force.

After the successful completion of “Wings for the Navy,” R.H. Rositzke & Associates principals Bob Rositzke and Mark Huffman began searching for a new project. Since 2011 marked the start of Civil War Sesquicentennial observances, Rositzke and Huffman began exploring the possibility of a program about the Navy’s role in the Civil War. “Most programs about the Civil War focus on infantry battles,” Rositzke said. “The Navy’s critical role in the war has been less explored, and provided us an opportunity to tell a very compelling story.”

In discussions with Matthew Eng, of the Hampton Roads Naval Museum, tasked by the Naval History and Heritage Command (NHHC) with providing Navy programs during Sesquicentennial events, it was determined that a series of short videos, as well as a longer, comprehensive program, would be highly useful. The Surface Navy Association (SNA) agreed to sponsor the project and provide initial copies of DVD videos to the Hampton Roads Naval Museum for use in Sesquicentennial events. SNA also plans to distribute more than 300 of the videos to the Navy Junior ROTC programs throughout the country thereby acquainting them with our very rich naval heritage. R.H. Rositzke & Associates will provide a “no cost” license to the Navy (NHHC) to permit their free use as long as the videos are shown in their complete form including credits and acknowledgements.

The five subjects of the video actually serve a structural role as well as a content role. Each of the five segments – approximately five minutes in length – serves as a stand-alone production that tells one aspect of the Navy’s story. This is ideal for use in Navy museums, kiosks and on the web. Assembled, the five segments fit seamlessly together and provide a longer production ideal for viewing at a dinner or as part of a program. The segments cover Leadership, Technology, Strategy, African-Americans, and Sailors.

“The Navy had outstanding, stable leadership during the war and it started at the top,” Rositzke said. “From Lincoln as a commander-in-chief to the brilliance of the naval commanders, it’s clear that Navy leadership helped achieve victory.” The Navy also benefited from technology improvements, most notably the development of ironclad gunboats. The naval strategy, developed at the beginning of the war, ultimately led to the Confederacy’s surrender. “When you think about it, blockading every southern port and inlet from Chesapeake Bay to Mexico was an incredible task, given the few ships in the fleet,” Huffman said. “It was called the Anaconda Plan for a very good reason – it strangled the life out of Confederate commerce.” 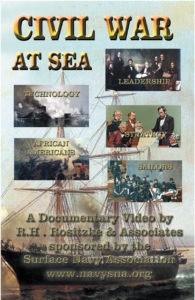 One of the more poignant parts of the Navy’s Civil War story is its relationship with escaped slaves. Once Union ships took up blockade positions off the southern coast, slaves loaded into small boats and found their way to the Navy ships. Navy Secretary Gideon Welles urged his commanders to enlist former slaves into the ranks if they wanted to serve. “Escaped slaves were among the most enthusiastic and motivated recruits the Navy had and Welles was smart enough to recognize it,” Huffman said. “Not only did former slaves serve with distinction in the ranks, but the Navy also hired former slaves, male and female, for civilian jobs. The Navy helped many former slaves transition from slavery to freedom.” African-American sailors served alongside their white counterparts aboard ship. Segregation apparently was never even considered. The final segment takes a look at the life of the average Sailor during the Civil War – how they were trained and how they fought.

The Naval History and Heritage Command library was a key source for research on this project. In addition, Barbara Tomblin’s “Blue Jackets and Contrabands” was a fascinating account of the Navy’s relationship with escaped slaves. Francis T. Miller’s “The Photographic History of The Civil War,” published in 1911, was very helpful in determining what photographic images existed. The filmmakers were pleased to find a wealth of raw material available for the project. “Frankly, it was not as difficult as we expected,” Rositzke said. “Even though photography was in its infancy in the 1860s, there were a surprising number of Navy-related photographs taken and, thankfully, many of them survived.”

“To me, the segment about African-Americans in the Navy tells a very human story that should make the Navy proud,” Huffman said. “The Navy’s slogan today is ‘a global force for good.’ This shows that has always been true.”