A good name is to be more desired than great riches – Prov. 22:1 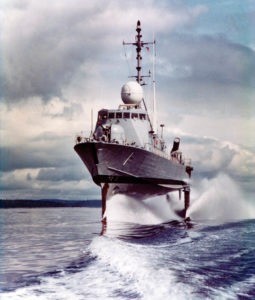 Early in 1974, I was serving as the NATO Patrol Hydrofoil Missile Ship (PHM) Deputy Program Manager under the late Capt. Jim Wilkins. We were making rapid progress with the Boeing Company to build the lead ship. However, SecNav Notice 5030 (of 15 February 1974) caused some deep program consternation by designating the name of the lead ship to be Delphinus (i.e., Dolphin in Greek). Upon realizing the effeminate sound of the adulterated name “Delphinius” and especially the further adulterated name of “Dull Penis,” we immediately set about to obtain a name change if it was at all possible.

Everyone told me it was impossible, but we decided to try anyway.

I tried every avenue I could find, involving all of the offices involved in the original name selection – The Office of Naval History and our program sponsor in the Office of the Chief of Naval Operations. However, despite many contacts, phone calls and vigorous arguments, the official SecNav Notice had been promulgated. No one wanted to go back to the Secretary of the Navy to attempt to persuade him that he had made a mistake.

I finally decided there was only one man in the Navy who could and would make the effort, if we could get word to him. That was Admiral “Ike” Kidd, a colorful and vigorous four-star admiral who commanded the Naval Material Command and had a strong fleet background. His frequent expressions of fleet problems indicated he would certainly understand and agree with the need for a name change – and would not shrink from saying so to the Secretary.

So I wrote a memo to the Commander of the Naval Sea Systems Command, Vice Admiral Robert Gooding, requesting him to take the matter to Admiral Kidd. I included in the memo all the background and the thought that if we could not obtain a name change the crew would have to be “fighting men indeed”. But after two further weeks had passed and I’d received no response, I went upstairs to inquire of VAdm Gooding’s Executive Assistant, Capt. (later Rear Adm.) Ed Peebles. He was very harsh on me saying, “You might as well forget it. I tried to change the name of a submarine once, and got absolutely nowhere! As far as I know, no one has ever succeeded in changing the name of a ship, especially the lead ship of a new class after the Secretary of Navy has officially announced it!” He said it was a dead issue and he himself would not take it up again with Admiral Gooding.

While we were talking, Vice Adm. Gooding passed us on his way out of the office. I soon left also, now finally convinced there was no hope for a name change. There at the elevator was Vice Admiral Gooding. We were the only two to board the down elevator. He was on his way to the basement to catch his car to Admiral Kidd’s office! I quickly filled him in on what the memo had said and asked if he had realized that one of the adulterations of the name Delphinus was “Dull Penis.” He apparently had not, but promised to take it up immediately with Admiral Kidd.

Two days later I was called by Admiral Kidd’s Executive Assistant. “Is this the young buck Commander who has asked for a name change to the USS Delphinus?” “Yes, it is”, I replied, wondering what would come next. He said, “Admiral Kidd has told me to tell you that Secretary Middendorf has agreed to a name change and he wants to know if the proposed alternative name, USS Pegasus is okay with you.”

I told him I thought Pegasus was a great name, especially for the type of ship it was to represent – flying hydrofoil ships. In less than two weeks, a new SecNav Notice 5030 had been promulgated, making the name change official.

I never understood how all of the vain effort of weeks could have proved so futile then suddenly all fall into place.  I still have difficulty thinking it was all merely a coincidence.