On Saturday, 22 October, the Naval Order of the United States (NOUS) held its annual Dewey Luncheon in which Admiral James L. Holloway, III, USN (Ret.) – former Chief of Naval Operations, and Chairman Emeritus of the Naval Historical Foundation – was recognized as the 2011 recipient of the George Dewey Award. The luncheon was one of the highlight events at the annual NOUS Congress, which was held this year at the historic Hotel Galvez, Galveston, TX. Dr. William Dudley presided over the award ceremony, commenting on its significance, and reading the Admiral’s service accomplishments. Admiral Holloway was unable to attend the meeting in person, and a special ceremony presenting the award was held at the Naval Historical Foundation office on 21 September 2011 (photo below). A video of the September award presentation was shown at the Dewey Luncheon,  including Admiral Holloway’s remarks upon receiving the award. 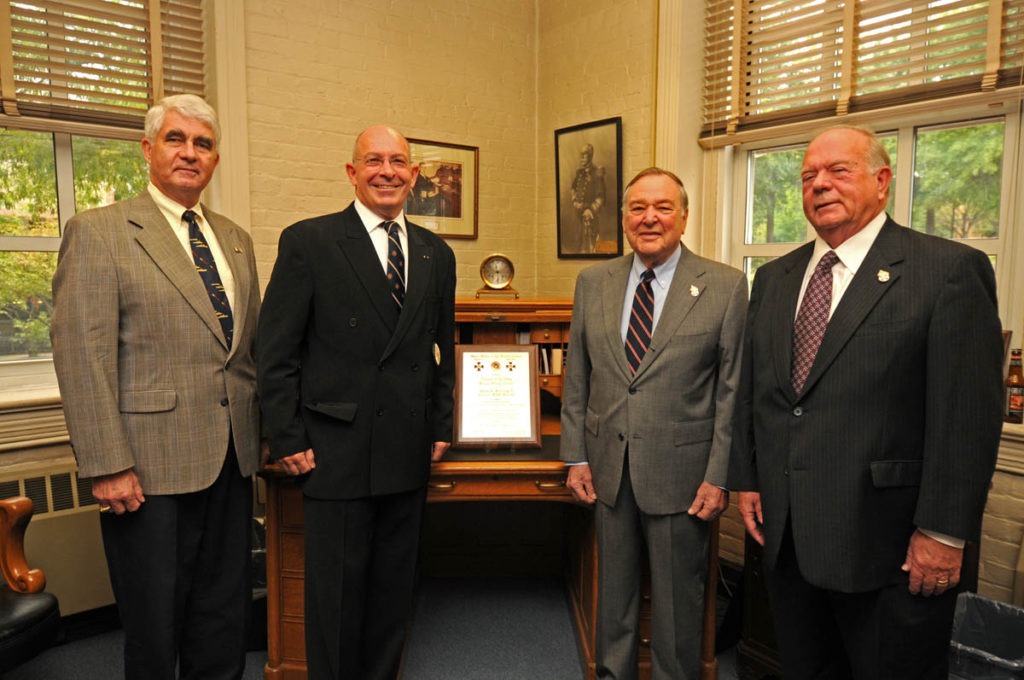 Please visit the Naval Order website to learn more. Below is the full text of the George Dewey Award press release. 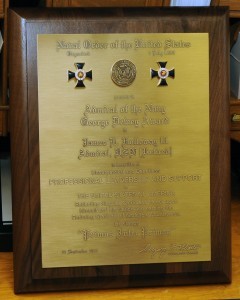 Retired Admiral James L. Holloway, III, United States Navy, twentieth Chief of Naval Operations (CNO) serving from 1974 to 1978 as the senior uniformed officer in the U.S. Navy and member of the Joint Chiefs of Staff under three Presidents; Nixon, Ford and Carter, is the 2011 recipient of the George Dewey Award, Naval Order of the United States.

During his active duty career, he was under direct enemy fire in three major wars—World War II, Korea and Vietnam. It was said that his destroyer was shot up by the Japanese, his plane shot down by the Chinese and his flagship shot at by the North Vietnamese.

During his tenure as CNO, the Cold War with the Soviet Union was at its height and Admiral Holloway was directly involved in the policy guidance for the negotiations in the Strategic Arms Limitation Talks with the Soviet Union. Through his personal intercession with President Ford, he saved the cruise missile from being banned by the Strategic Arms Limitation Treaty (SALT II), and the cruise missile has become the principal offensive weapon for the U.S. Navy’s destroyers, cruisers and submarines. To take advantage of this new capability, Holloway reorganized the structure of the operating forces of the fleet into battle groups, integrating carriers, cruisers, and submarines into individual tactical units which would exploit the expanded warfare capabilities of the surface combatants for the full range of naval tasks associated with the national strategy of a forward posture, to handle both the threat of the Soviet Navy and the belligerency of the third world.

James Holloway was born in Charleston, SC., the son of a career naval officer who also attained 4-star rank. He attended the U.S. Naval Academy where he was on the wrestling team, and graduated in June of 1942 as a member of the first three-year class accelerated by World War II. During the war he served aboard destroyers in the North Atlantic and North African waters. In the Pacific he participated in the Saipan, Tinian, Palau and Leyte Gulf campaigns as gunnery officer of the destroyer Bennion (DD-662). During the Battle of Surigao Strait in October 1944, his ship scored a direct torpedo hit at point blank range to help sink the battleship Yamashiro, sank the Japanese destroyer Asagumo with gunfire, and shot down three Zeros. He received the Bronze Star Medal, Navy Commendation Medal, and the Philippine Presidential Unit Citation for his service on Bennion.

Following World War II, he entered flight training and became a naval aviator in January 1946. He made two aircraft carrier deployments to the western Pacific, flying Grumman F9F-2 Panther jets on Korean War combat missions. He was given a battlefield promotion to command of Fighting Squadron 52 when his Commanding Officer was lost in an air strike against the Chinese. He was awarded the Distinguished Flying Cross, three Air Medals and the Korean Presidential Unit Citation for service during that conflict.

As Commanding Officer of Attack Squadron 83, he flew Douglas A-4 Skyhawks from the carrier USS Essex (CVA-9), supporting the 1958 U.S. Marine Corps landings in Lebanon, until Essex was redeployed through the Suez Canal to join the Seventh Fleet in the Formosa Straits. There he flew missions in support of Quemoy and Matsu to counter the Chinese Communist threat of an invasion of these off-shore islands. The Peoples Republic of China abandoned its belligerent activities against Taiwan when faced with six U.S. Navy carriers operating in the PRC claimed territorial waters.

In 1959 he reported to the Pentagon. As a commander on the staff of the Deputy CNO for Air Warfare, he developed a plan for standardizing the operating procedures for naval aircraft. It was approved by CNO Admiral Arleigh Burke and implemented for the entire fleet as the Naval Air Training and Operating Procedures Standardization (NATOPS). This system, still in force today, has been credited with a substantial contribution to the reduction of the naval aviation accident rate.

After completing a year of instruction under Vice Admiral Rickover, from 1965 to 1967 he commanded USS Enterprise (CVAN-65), the Navy’s first nuclear-powered aircraft carrier for two combat cruises in the Gulf of Tonkin during the Vietnam War. Under his command, Enterprise established records for the number of combat sorties flown, won the Battle Efficiency “E” award for the best carrier in the Pacific Fleet, and was awarded the Navy Unit Commendation. He personally received two awards of the Legion of Merit Medal.

Returning to the Pentagon, in 1968 he established the Navy’s Nuclear Powered Carrier Program, which led to the building USS Nimitz (CVN-68) and paving the way for nine more super carriers of this class. For this he was awarded the Navy’s Distinguished Service Medal.

He was promoted to the rank of Rear Admiral in 1970 and assigned as Commander, Carrier Division Six, the Carrier Striking Force of the Sixth Fleet. In response to a Syrian invasion of Jordan, he deployed his three carriers to the Eastern Mediterranean after reinforcing their air wings with additional fighter planes, and conducted aggressive carrier air exercises. This clear demonstration of U.S. air power on the scene resulted in a prompt withdrawal of the Syrian armored column. His task force then covered the evacuation of a Mobile Army Surgical Hospital (MASH) unit from Amman, Jordan, by Marine helicopters. For his performance of duty in this assignment he was awarded a second Navy Distinguished Service Medal.

After promotion to Vice Admiral in 1970, he was ordered to command of the U.S. Seventh Fleet in 1972 during the Vietnam War and directed the strike operations of the fleet, which numbered more than 150 ships including six aircraft carriers, against objectives in North Vietnam during Operations Linebacker I and II. This intense joint air effort against previously proscribed targets in the Hanoi-Haiphong sector, helped persuade the North Vietnamese to accept a cease-fire agreement. Subsequently, the Seventh Fleet performed the mine clearing operations in North Vietnamese ports which were a condition of the negotiated terms of the agreement. As Commander Seventh Fleet he received a third Navy Distinguished Service Medal and the Korean Order of National Security. 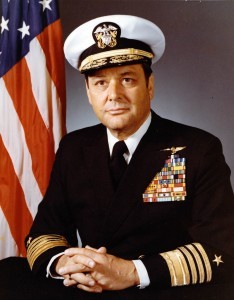 As Chief of Naval Operations from 1974 to 1978, he was a member of the Joint Chiefs of Staff, and during this time served as acting Chairman of the JCS at the direction of President Ford during the evacuation of Cyprus; the rescue of the U.S. flag merchant ship SS Mayaguez and the punitive strike operations against the Cambodian forces involved in its seizure; the evacuation of U.S. nationals from Lebanon; and the Korean DMZ incident in August 1976, which led to an ultimatum by the U.N. Forces in Korea and an armed stand off between the two armies before the North Koreans backed down. As CNO and acting JCS Chairman, he received a fourth Navy Distinguished Service Medal and two Defense Distinguished Service Medals.

After retiring from the Navy in 1978, he chaired the Special Operations Review Group convened by the Department of Defense to investigate the aborted 1980 Iranian hostage rescue attempt. From 1980 to 1988 he was President of The Council of American-Flag Ship Operators (CASO), an association of US Merchant Marine companies engaged in the foreign trade. In 1985, he served as Executive Director of the President’s Task Force on Combating Terrorism. In 1986, he was appointed by Vice President Bush as Special Envoy to the Middle East to resolve a territorial dispute between Bahrain and Qatar. He also served as commissioner on the President’s Blue Ribbon (Packard) Commission for Defense Management, the Commission for Merchant Marine and Defense, and the Department of Defense Commission for a Long Term Integrated Strategy.

In 1980 he became President of the Naval Historical Foundation. He served for 28 years as President and then as Chairman, and upon his retirement from that position, he was elected chairman emeritus and awarded the Distinguished Public Service Medal by the Secretary of the Navy. He was appointed Chairman of the U.S. Naval Academy Academic Advisory Board in 1986, and in 1996 at the request of the Superintendent of the Academy, established the U.S. Naval Academy Foundation, serving as its first Chairman of the Board and President until retiring in 2003 as chairman emeritus.

In 2002, in recognition of his significant contributions as Chairman of the Board from 1989 to 1999 at Saint James School, an independent secondary school in Washington County, MD founded in 1842 and which he attended during his high school years, a new dormitory building was dedicated as “Holloway Hall.”

From 1981 to 1992 he was first President and then Chairman of the Association of Naval Aviation and in 1985 he was Technical Advisor to the movie “Top Gun.” In 1994 he was given the award of the Modern American Patriot from the Sons of the Revolution, and in 1997 received the Outstanding Civilian Leadership Award from the Navy League of the United States. In 1999 he was elected to the National Wrestling Hall of Fame. He received the U.S. Naval Academy’s Distinguished Graduate Award in 2000, and in 2004 was inducted into the National Museum of Naval Aviation’s Hall of Honor for extraordinary achievement in naval aviation. In 2009 he was given the Tailhook Association’s award for “A Lifetime of Commitment and Support of Naval Aviation.”

He was a member of the New York Yacht Club, The Annapolis Yacht Club, The Brook Club of New York City, the Maryland Club of Baltimore, and the Metropolitan Club of Washington, DC, where he served as President in 1982.

He is the author of Aircraft Carriers at War: A Personal Retrospective of Korea, Vietnam, and the Soviet Confrontation published in 2007 by the Naval Institute Press. His book was selected by the Chief of Naval Operations in 2008 for the Navy’s professional reading program. He was named U.S. Naval Institute Author of the Year for 2008 and received the 2008 Alfred Thayer Mahan Award for Literary Achievement from The Navy League of the United States. Adm. Holloway’s entry, “Tribute to the Tinker Toy: The Navy’s Skyhawk Bantam Bomber” was awarded Honorable Mention in the international 2009-2010 Cold War essay contest sponsored by Virginia Military Institute’s John A. Adams Center for Military History and Strategic Analysis.

In addition to his twenty eight American military personal decorations, unit awards and campaign and service medals and ribbons, he received twenty foreign decorations over his career including the French Legion of Honor with the rank of Commander, the Grand Cross of the Order of Merit from Germany, and two awards of the Order of the Rising Sun from Japan.

Note:  Any United States civilian eligible for Regular membership in the Naval Order, whose record for service sets him/her apart among his/her peers, is deemed eligible for the “Admiral of the Navy George Dewey Award.” The period of eligibility is not an issue for this award. It is assumed that the awardee will make every effort to accept this award in person. Each local Commandery may submit the name of only one candidate for consideration each year. Each submission shall be accompanied by a brief biographical sketch which will be circulated for voting purposes.