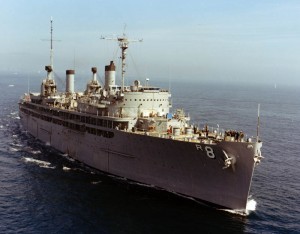 Sharing a background of military service (highlighted below), the enthusiastic interrogators elicited information and stories from former ETR1 (lst Class Electronics Technician, Radar) Jerry Weltzin, who served on active duty in the Navy from 1962 to 1967 and later left the service to marry a kindred spirit and fellow IBM employee, Linda Chlan, a former U.S. Air Force enlisted electronics specialist who worked on B-52 electronics.

Weltzin came prepared for his interview with a plethora of USN service documents that chronicled duty stations, assignments, and awards. The electronics technician trained at Great Lakes U.S. Navy Training Center in Illinois; earned his E2 rating in 1964; and served on the USS Jason (AR 8), a repair ship that plied the West Coast and then coastal Vietnam.

Built during World War II, Jason was a mere two decades old when a young Weltzin reported aboard.  Jason departed San Diego 4 January 1965 and arrived Yokosuka on the 25th. After operations in Japan and at Okinawa, she reached Subic Bay 6 March and served ships of the 7th Fleet until heading home 31 August.  It was his time during this deployment in the 530-foot Jason that sparked many recollections.  Following the transit from Subic Bay in the Philippines, to coastal Vietnam, the skilled, 1,000 plus crew serviced naval patrol boats; refueled and repaired structures and electronic equipment on naval vessels; operated as a hospital ship; and provided ship and boat services for machinery, welding, electrical shops, transportation, equipment, supplies, fuel and ordnance. The Jason also housed a USMC detachment, and served as a flagship. Petty Officer Weltzin’s duties included being transferred to other ships, making house calls to repair faulty equipment or working on equipment brought over to his repair shops within the “floating shipyard” that was Jason.

While she didn’t have the appearance of a combatant, small arms, four-5” and eight-40mm guns provided limited offensive and defensive armament capability.   Weltzin recalled how AR 8 weathered dangerous typhoons with its heavy gear and equipment, 30-ft. draft, and 75-ft. beam.  The ship dimensions enabled the ship to remain functional when heavy seas reached the 2nd deck and threatened gun mounts.

Following his tour in Jason,  Weltzin received orders to NAVCOMSTA Adak, Alaska where he had access to highly classified technical information; was the lead petty officer on station; maintained radio frequency technology for submarines and other USN vessels, and was flown by helicopter to various USN vessels, including aircraft carriers; and climbed to dangerous, windblown heights to repair communications antenna in Aleutian Islands storms and winds; and driving a snow cat vehicle to check and repair tower navigation lights.

Weltzin, an Indiana farm boy and high school athlete, attended technical schools, and later, in his naval career, learned about cryptography, and maintained sonar, radar, and microwave systems. Weltzin applied his many skills to sail boats, scuba diving, and instruction; and performed shipboard law enforcement duties as Master at Arms.

Weltzin left active duty and joined the Naval Reserve, where he “earned ETR1 status in the USNR teaching basic electronics while attending Valparaiso University,” and matriculating into his IBM career.

Jerry Weltzin is just one example of the many skilled, dedicated, patriotic men and women of the U.S. Armed Forces who have served and are serving in a myriad of essential support capacities. Their sacrifices and service in defense of the United States must not be forgotten.

Thomas Ostrom served in the USCGR from 1961 to 1967. He is the author of four books on Coast Guard history, the most recent: “The United States Coast Guard in World War II: A History of Domestic and Overseas Actions,” and “The United States Coast Guard in National Defense: From World War I to the Present” (McFarland & Company, Inc., Publishers). The books cover significant coordinated USN and USCG missions. Ostrom lives in Rochester, MN.

Captain Joseph Connell, an IBM retiree, was a Vietnam helicopter pilot in the U.S. Air Force 38th Air Rescue and Recovery Squadron (1960-1966). Joe is also knowledgeable about the U.S. Coast Guard role in Vietnam at sea, on river patrol, and in SAR helicopter rescue missions. Joe is active in veteran’s affairs and has escorted WW2 veterans to the World War Two Veterans Memorial in Washington D.C. on several Southeast Minnesota Honor Flights.