This year marks 100 years of naval aviation, and the Navy has celebrated with ongoing events, from public commemorations and publications, to awe-inspiring airshows. These events celebrate the year 1911 – a year which featured a series of landmark achievements in naval aviation. The first successful take-offs and landings from ships at sea laid the foundation for a century of American airpower. The video “Wings for the Navy …100 Years of Naval Aviation” tells the story of that first formative year, and three men who made it possible.

The video was the brainchild of Bob Rositzke and Mark Huffman, who worked together in the video production business from 1996 to 2006, at Rositzke’s company, Empire Video. Rositzke sold the company in 2006, and the pair soon missed working together. In 2010, they decided to partner to create naval heritage productions as R.H. Rositzke & Associates. Since the Naval Aviation Centennial was fast approaching, Rositzke suggested their first project be a video about the birth of naval aviation. They assumed others would try to cover the entire 100 years, so Rositzke and Huffman decided to focus on the events of 1910-11 that led to the Navy’s entry into aviation. 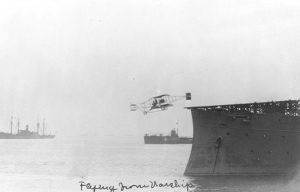 Eugene B. Ely flies his Curtiss pusher airplane off the deck of USS Birmingham, in Hampton Roads, Virginia, 14 Nov 1910.

“The story of Eugene Ely is a very compelling one, and I thought from the start it would make a great video,” Rositzke.

Their 26-minute video focuses on three individuals: Ely, the civilian test pilot who was the first to fly a plane from the deck of a ship; Capt. Washington Chambers, the naval officer in charge of developing aviation; and Glenn Curtiss, an early aviation designer and inventor. Together, these three men took a huge risk that paid off.

“For filmmakers, you could hardly imagine a more dramatic scene, in which a pilot tries, for the first time, to take off in a biplane from a short wooden platform built over the guns of a naval ship,” Huffman said. “The fact that they tried it, and that it succeeded, gave the concept of naval aviation a huge boost.

Rositzke and Huffman decided to produce the video; funding it themselves until a sponsor could be found. With the help of Capt. Edward F. “Ted” Bronson USN (Ret.), a former combat aviator and volunteer at the Naval Historical Foundation, they secured sponsorship from the USS Midway Museum, in San Diego. The producers conducted research through a variety of naval sources, including the Navy History and Heritage Command, which provided technical oversight to ensure historical accuracy. They interviewed CDR Robert Moss, USN, an expert on Chambers; CDR James Reid, USN (Ret.) a former naval aviator and a docent at the Hampton Roads Naval Museum in Norfolk, VA, an expert on Ely; and Karl Zingheim, historian for the USS Midway Museum in San Diego, CA, and an expert on Curtiss.

The result is “Wings for the Navy,” a fast-moving, entertaining look at how the U.S. Navy earned its wings. The DVD carries an introduction by VADM A.G. Myers, head of the Navy’s official Centennial of Naval Aviation Celebration. While R.H. Rositzke & Associates holds the copyright for the film, it was licensed to the Navy in January 2011 for their free use in its complete form including acknowledgements and credits.