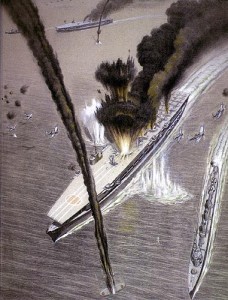 In 1999, the Chief of Naval Operations sent a message to the fleet directing the annual commemoration of two significant events in our proud naval history—the birth of our Navy on 13 October 1775, and the U.S. Navy’s World War II victory at Midway from 4 to 7 June, 1942.

Each year, a dedicated group of non-governmental Navy organizations in the Washington, DC-area have banded together as the Battle of Midway Commemoration Committee to help carry out that Navy leadership directive. The groups include:

In past years the speaker and program have been:

Each year, Navy commands around the world gather to remember the service and sacrifice of those who wrote what Admiral Chester W. Nimitz rightly called “a glorious page in our history.”  And what led to that victory?

The Battle of Midway, fought near the Central Pacific atoll of that name, is considered to be one of the most decisive battles of World War II in general and of the Pacific campaign in particular.

From a vantage point of sixty nine years, we look back at Midway as more significant than simply a strategic victory which, as part of a grueling campaign from the battle of the coral sea through the successful capture of Guadalcanal, turned the tide in the Pacific. Historians have suggested that Midway had a broader impact on the outcome of World War II as well as the geo-political configuration of Cold War Europe.

Secretary of Defense James R. Schlesinger asserted at this dinner several years ago, “Midway was far more than a decisive naval victory. It was far more than the turning of the tide in the Pacific war. In a strategic sense, Midway represents one of the turning points of world history – and in that role it remains under-appreciated.” 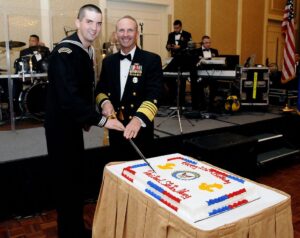 In June 1999, then-CNO ADM Jay Johnson signed out a NAVADMIN message stating “…the two most significant dates in our naval history are 13 October 1775, the birth of our Navy, and 4 June 1942, the battle of Midway. These two prominent days will henceforth be celebrated annually as the centerpieces of our heritage. During the week of 13 October, all commands are encouraged to participate in birthday activities such as birthday balls and historical seminars to celebrate the origin of our service.”

From 1999 through 2005, the Commandant, Naval District Washington hosted, organized and ran the annual birthday celebration.  In 2006, after a series of meetings between representatives of NDW and National Capital Council Navy League (NCCNL) and Naval Historical Foundation (NHF), NCCNL agreed to host the event including issuing invitations, coordinating RSVPs, contracting with the hotel venue, developing the evening sequence of events, inviting senior Navy leadership, printing programs, etc.

NHF agreed co-host the event with a role of providing an annual historic theme for the event, including displaying appropriate historic images and sometimes producing a video about that theme. NHF-sponsored themes have included: Victory in the Cold War; Centennial of the Great White Fleet; Honoring Navy Individual Augmentees in Iraq and Afghanistan; 40th Anniversary of Apollo 11 and Navy in Space; Naval Aviation Centennial; Civil War Sesquicentennial.

The 2012 dinner theme will feature the bicentennial of the War of 1812. 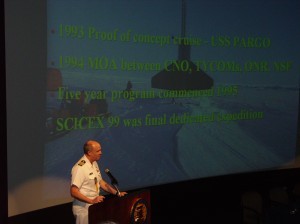 Presentations during the 2008 Submarine History Seminar

Each year, on or close to the U.S. Navy’s Submarine Force 11 April Birthday the Naval Submarine League, with the Naval Historical Foundation and the Naval History and Heritage Command as co-sponsors, produces a Submarine History Seminar in the Washington, DC area. Venues have included the U.S. Navy Memorial’s Naval Heritage Center and the National War College. The evening event includes refreshments, the presentations detailed below, and a ceremonial Submarine Force Birthday cake cutting.

2002 “The Education of Admiral Rickover.”

Three papers were presented by Naval Historical Center historian Gary Weir; Capt. Jack Crawford, USN (Ret.), an engineer at Naval Reactors through the development period; and VADM Kenneth Carr, USN (Ret.) a member of the first Nautilus wardroom, on the construction of Nautilus and her impact on naval warfare.

2007 “Cold War Under the Sea: How Submarine Intelligence Collection Made a Difference—Lessons from the Past.”

2008 “Fifty Years Under the Ice: A Historical Look at the Scientific, Strategic and Operational Aspects of Submarine Arctic Operations.”

2011 “The Rise of the Submarine Launched Ballistic Missile.”

The 2012 Submarine History Seminar was held on the evening of 24 April 2012, as part of the National War College Commandant’s Lecture Series in historic Roosevelt Hall at the War College’s Fort McNair campus in southwest Washington, DC.  2012 marks the 11th year that the Naval Historical Foundation has partnered with the Naval Submarine League and the Naval History and Heritage Command to stage these compelling looks back at the U.S. Navy’s submarine force in war and peace. The seminar took an in-depth look back at the intensive effort in the 1970s and 1980s to develop over-the-horizon (OTH) targeting methods needed to ensure that newly developed HARPOON and TOMAHAWK cruise missiles could be employed reliably to their full range potentials.

The audience of nearly 70 active duty and retired Navy personnel, plus eight midshipmen of the Naval Academy’s Dolphin Club, listened with rapt attention to the participants’ descriptions of the U.S. Navy’s ultimately successful effort to target the Soviet Navy before they were able to develop the same capability to target USN ships.

The seminar was preceded by food and refreshments sponsored again this year by the Northrop Grumman Marine Systems office.

2013 “Seawolf and The Maritime Strategy: Examining the Relationships of Policy, Strategy, Technology, Tactics and Acquisition.”

On 11 April 2013, nearly 120 guests attended the Submarine History Seminar in the Navy Museum’s Cold War Gallery to hear how the U.S. Navy’s posture changed from the Carter years of being a reactionary one that assumed the Soviet Navy would replay the role of the Germans in fighting a Battle of the Atlantic III, to a proactive strategy during the Reagan years that aimed at attacking Soviet ballistic missile submarines at the onset of war. A key was a realization by American Navy leaders that the Soviets had little interest in using their submarine forces to interdict allied operations in the North Atlantic. This shift in American thinking on how to employ forces in a general war with the Soviet Union became known as “The Maritime Strategy” and the Seawolf submarine, of which only three were built, was designed as a big, fast, quiet, torpedo-laden weapon system that could effectively operate in hostile waters.

The participants were asked to address the following questions:

To address the questions, three distinguished individuals, with moderator RADM Jerry Holland, USN (Ret.) discussed the design of Seawolf and the evolving thought process that led to the Maritime Strategy.

The Naval Historical Foundation is partnering with several museums and institutions in the VA-MD-DC area to commemorate the 200th anniversary of the devastating burning of Washington, followed by the penning of the Star Spangled BAnner by Francis Scott Key and the decision to rebuilt our new nation’s capital as a symbol of American pride and independence.

A variety of commemorative events will take place this year in our nation’s history, museums, archives, libraries, historic sites, and neighborhood associations across the National Capitol Region during this “Star Spangled Summer.”

For a full list of events and information about the DC 1812 Commemoration, please go to dcwarof1812.org.